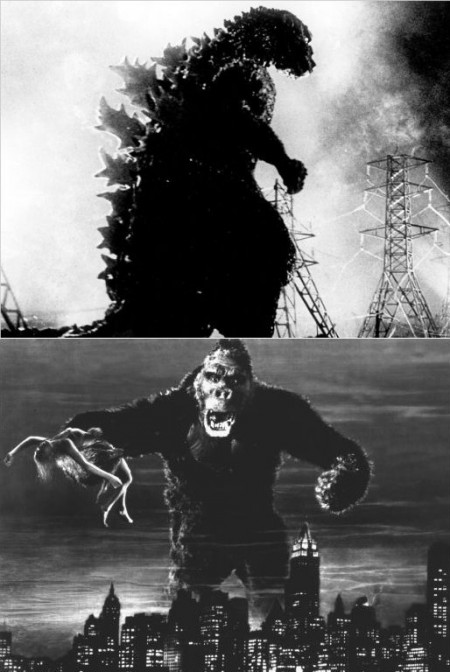 Japan’s entry into this scrum is the nuclear-powered reptile-warrior known as Godzilla. Since 1954, this mutant-dino has been plaguing Tokyo with not only his sheer size but also his incredible array of powers, which include his radioactive breath, bludgeon-tail, and size-defying agility. On the one hand, you might be inclined to trust Godzilla because he occasionally defends the Land of the Rising Sun from alien threats. However, it usually doesn’t take too long for the prehistoric-throwback once known as Gojira to turn around and start rearranging the skyline once again.

On the other side of the globe, America sends into battle its beloved gargantuan-gorilla: King Kong. This mega-ape hails from Skull Island, a natural time-capsule that has preserved the exotic creatures that walked the earth before man. Kong’s having a good time, chillin’ out and being worshipped as a deity, and then his ass is carted back to America so that he can be made a spectacle of. Needless to say, the monkey goes mad and decides to kidnap a hot bitty and climb some of NYC’s tallest structures. In the process, the guy fucks shit up, endears himself to anyone with a heart, and goes out in a Cassidy/Sundance Kid blaze of glory.

So how about it? Who’s the best city-rockin’ monster of all time – Godzilla or King Kong? It’s a debate that’s been around as long as the characters themselves and has yet to be resolved. Hell, even the 1962 slugfest left the question somewhat unanswered.

If you have to watch your city be destroyed by a giant beast, who’d’ya want it to be?