THIS WEEK ON Walking Dead: Secrets 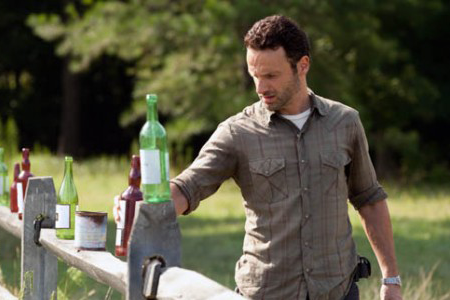 Last week we left Glenn and Maggie in a barn full of walkers.   If you didn’t watch it, its not what you think Hershel is keeping them there with a purpose.   This week we pick up with Carl and Lori feeding chicken, discussing philosophy.   Carl’s utterance of the line “Everything’s food for something else” feeds into Lori’s doubt about giving birth to a child in this world.   Its an interesting view of how a child adapts to the situation he’s been put in.   There’s no moral dilemma, there’s no internal conflict.   Its just a simple transition.   “Oh, people turn into flesh eating monsters and we have to kill them … ok.”   Change doesn’t affect children as much because they have less of a routine.   This whole episode deals with people at different stages of their lives and how they’ve adjusted.

While Carl is pontificating about the shift of the food pyramid and Lori struggles to keep up, Patricia is busy torturing chickens.   In an attempt to show that Hershel’s way of thinking is not confined only to him, she is feeding the walkers in the barn.   But does it really?   If they were still people, wouldn’t you cook the food?   Perhaps they tried and there were no takers.   So you’ve got to think that whatever these people are “sick” with is a little bit more serious if  they’ve  given up things like sleep and enjoy their food a little more undercooked than usual.   But hey, everyone likes chicken, I hear they taste like human.

The search for Sophia drags on agaaaaaain.   In this scene, its used to highlight how much the rest of the group take Glenn for granted as he passes out fruit and acts awkward.   At this point, I just want them to find her as a walker, bring her back, have her bite Lori and then put them both down.

While people are hustling and bustling Carl asks Shane to teach him to shoot.   As a reader of the comics, this scene was a mixed bag.   It seems forced because Rick knows firearms as well, why not ask him?   Its foreboding because of … well … certain events that transpire.   I won’t spoil it, but I will tell you to remember this scene, you’ll know it when it happens.

The final scene that transpires during the opening chaos at the camp is the quick little conversation with Glenn and Dale.   Glenn starts out beating around the bush and Dale tells him to cut the shit and let it out.   God damn I love brevity.   During Talking Dead Kevin Smith described Dale as the Ben Kenobi of the group.   He walks around telling people that they are important and hands them a laser sword.   I’d say that’s a fair description.   While he’s only in a few scenes, this is Dale’s episode.   He’s the star.

Shane starts to teach the rag tag ruffians how to shoot.   At first there are no real standouts.   Everyone is just happy to be pointing them in the right direction.   Andrea however emerges as the star pupil.   This is the moment where she starts to resemble her comic book counterpart.   In the comics, she’s pretty much a sharp shooter.   Looks like she’s on track.   I really like Andrea’s character in the comics, but it the show, its been a slow process.   I think Laurie Holden is doing a great job, she’ll get there eventually.

Dale confronts Hershel in a verbal light saber duel about walkers in the barn.  At first glance, Hershel may not seem like a good antagonist.   He’s polite, he’s respectful, he’s helpful and caring.   But, he keeps zombies as pets and he’s trying to kick the group out.   He certainly is a complex character that deserves a closer look.   I’m glad they are slow playing him rather than shoving him in our faces.

Have I mentioned that I hate Lori?   I don’t think I have in a week or two.   Well, when she finds out that Hershel wants them gone, she tries to read Rick the riot act for keeping secrets.   Wait a sec, isn’t she hiding an affair and a child from him?   If this was a court case, I would cite the case of Pot vs Kettle.   I’ll get into what pisses me off about Lori in this episode a little later.

After pissing off Andrea on the gun range, Shane apologized and asked if she would help search for BORED!   This scene would have felt better if Shane just asked Andrea is she wanted to find a mob of zeds to tee off on.

Back at the camp, Dale notices Lori feeling nauseated at the smell of meat.   He sits her down and tells her he knows.   He offered her solace in the fact that her father was the best star pilot in the galaxy, and a good friend.   Lori sucks because its almost like she intentionally chooses to be a bitch in every possible situation.   You can argue that she is a strong woman, she is, I agree.   But you can have a strong female presence without having them being a disruptive asshole.   In this conversation, she asks Dale if Glenn told him about the baby.   Dale could see the wheels turning in her bitchy head and slaps her down with a “What the fuck did you expect, Glenn couldn’t hide two droids from the empire in a modified
YT-1300!”

This conversation does reveal what makes Lori tick.   She admits that memories keep her going.   A remembrance of the past.   She sees Carl adjusting to the world and it breaks her heart.   She is at the mid point in her life.   Change is harder for her to digest because its alien to everything she’s known.   She doesn’t know if she’ll have a way to connect with her son, and she is afraid that her unborn child will know nothing of the world they lived in.   It’s a daunting task raising a child in a world without luxuries like consistent shelter, running water, a steady food source, and not to mention, what do you teach it?   When the child grows up, its going to have all sorts of hands on skill, but not too much in the way or math, science or history.   As much as I hate her as a character, I don’t wish her choices on anyone.

Maggie and Glenn head into town for some supplies.   Maggie has got a bit of an internal conflict going on.   She really likes Glenn, but knows her father wants them gone.   The walker at the well has he questioning her belief structure, and Otis’s death has proved that things have gotten dangerous.   Make no mistake, the shit has been real for the Greens since Z-Day, but Hershel did a good job of managing his people by giving them something to hope for, a cure.   While Maggie’s mother and other friends/relative have been zombiefied, they still has the bodies.   Otis is gone, that loss took something from the Greens.   It took their hope.   She still thinks of them as people.

Glenn’s problem is he tries to please too many people.   He shares Lori secret list with Maggie as a sign of contrition.   He wants her to know that her secrets are just as disposable as other people’s.   While she is trying to sort out her feelings, Maggie is attacked by a walker.   Glenn rushes in to save the day proving that shelves can be used for more than storage.   Maggie throws a world class bitch fest shit storm at Lori when they get back.   It was great.   Go Maggie!

Maggie lets Glenn in on what’s really bugging her.   She hates the way the rest of the group looks at Glenn.   She hates the way they think he’s disposable.   In part, its Glenn’s own fault.   He’s the one that put himself in this position all those weeks ago on the outskirts of Atlanta.   Maggie then tells Glenn that she’s lost some people, but couldn’t bear the thought of him becoming a walker.   This is huge.   On one sentence, she lets Glenn know that despite the high school bull shit she tosses his way occasionally, that she does care for him.   It also has her referring to the dead as walkers.   It’s a sign that she’s choosing Glenn and his friends over her family.   Despite her mother eating raw chicken and her father’s disapproval, I have a good feeling about these two.   Tragic romances always work out, right?

Shane and Andrea reach the little hamlet that supposedly Sophia may have been at for some reason.   I know, its thinner than Gandhi.   Soon enough however, its apparent why they were put here.   They needed to throw Andrea into an actual life and death situation and have her cathartically face the choice of wanting to live or committing suicide.   Andrea channels her inner Matrix and goes bullet time on those zeds.   Shane and Andrea make it back to the car and leave the cul-dead-sac behind them.   On the way back, Andrea subtly tells Shane that she drives stick … they have sex.   There I dumbed it down for you.

When Glenn comes to Lori with the prenatal vitamins, all I could think of is that Glenn is the John Cusack of the zombie-pocalypse.   He gives the advice people need to hear, and does it with an honesty you can’t ignore.   Glenn has no ulterior motive.   He doesn’t use subterfuge.   Glenn always speaks from his heart, when he’s not raising a boom box above his head and blaring Peter Gabriel that is.

When Shane and Andrea return to camp, Dale has his BS x-ray specs set to full power.   He knows something is up.   Call it a disturbance in the force, call it old man intuition, the point it, Dale has had it.   He pulls Shane aside and tells him he knows some shit.   He thinks he is the kind of man that would kill his best friend to get what he wants.   He tells him he is suspicious of Otis’s death, and maybe its best if Shane heads out.   Then then goes all dark side on Dale and threatens him.   You can see Dale’s face go from anger to fear very quickly.    How wet are Dale’s underpants?   It Depends … get it, he’s old.

Next we head over The Adventures of Lori the hypocrite: Today’s tale, Abortion of Trust.   Lori decides that she should down pills like she’s at Woodstock.   I mean, why the fuck not, she’s squatting shanty town with a bunch of drifters on someone else’s land.   All that’s missing are the tweets about her #OccupyingtheGreenFarm and talking about how she’s the 99%.   Rick of course finds the empty box of pills and puts it all together.   He confronts Lori about her lying bitchy ways.   He’s pissed that she kept the pregnancy from her.   He asks if there is anything else, she finally comes clean about Shane.   Here it is.   Here’s the wedge that’s going to be driven between two friends.   Here’s the situation that’s going to cause the group to fracture and cause in fighting.   Rick is … wait, Rick is ok with it?   Huh?   Way to build up to nothing.

Despite some questionable choices in method, I actually liked this episode.   Its starting to deal with more relatable issues.   Issues like Maggie and her family verse her romantic life.   Rick and Lori deciding to bring a child into the world.   Dale and Shane vying for the attention of Andrea.   Hershel struggling with the decision to send people to their deaths to protect his secrets.   Next week is the mid season finale.   I have an idea of how it will end, I’ll let you know if I’m right.