THIS WEEK ON The Walking Dead: Save the Last One 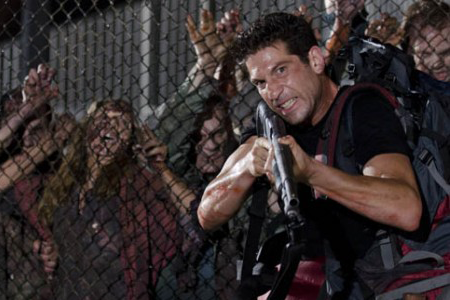 We start this week’s episode with a simple scene.   Shane is shaving his head like it’s his first day in Leavenworth and he wants to suck up to the white supremacists.   Its short, it’s concise and it sends a clear message; “This is where the episode will end up.”   Then we are greeted with another voice over.   Rick is telling Lori a story about how Shane was a pimp in high school and he got all the ladies.   Great, he was O’Bannon, we get it, stop with the voice overs, you’re not Michael Westin.   This episode dealt with more storylines than any previous ones, so there was a lot of jumping around.   Because of that, this write up will also be jumping around, try to keep up.

We head over to the RV and we see Andrea doing something gun related while Carol cries.  Great to see the characters haven’t changed.   Darrell lies on the RV floor no doubt wondering when he’d been bit and put down, because being here with these people is clearly hell.   He decides that he is in fact alive and walking through a possible zombie infested forest is a better use of his time and talents.   Since very little story can be told with one character running around, we need Andrea along to push the narrative.

Flashjump!   We shoot over to the O and S show.   Otis and Shane are on top of some wooden crates as they blast zombies and strategize.   How’d they get up there?   Fuck you, that’s how.   Otis comes up with a plan to save their asses and then gracefully leaps through the air and … falls on his fucking face.   Honestly, who didn’t see the fat guy falling?   Always funny.   While Otis disappears into the locker rooms, we watch Shane jump out a window.

Super shift!   We go live to Glenn arriving at the Green farm.   He says some awkward things while T-Dog does his best useless impression.   Mark it here folks, the courtship of Maggie by Glenn starts now.   He’s obviously got feelings for her, and she’s just quirky enough to dig Asian guys.   In the last episode it was made abundantly clear that T-Dog needed help, but I hoped he bled out before Glen got there … too bad, no luck.

Swisshhhh swirssh (That’s the sound my head makes when the scene changes quickly).   Darrell and Andrea have an interesting relationship.   As the most eligible woman in the group, I was sure Darrell would be trying like hell to nail Andrea.   She doesn’t have a kid like Carol, and she isn’t involved in a complicated love plot with a bunch of cops like bitchfac … I mean Lori.   So I thought this was the perfect time for Darrell to lay on that irresistible redneck charm and bag himself a doe.   I’ve heard better pickup lines than “I got poison ivy in my ass”, but not many.   Darrell instead uses this time to explain that he was awesome from an early age.   At the age of 6 he threw a no hitter in kickball.  When he was 9 he killed a bear with his bear hands.   No, that’s not a typo; he ripped off the bear’s hands with his bare hands, wore them like gloves, and then killed the bear with them.   When he was 14 he went looking for Atlantis.   He found it in two days.   He was disappointed how easy it was, so he hid in in a better place.

Shazam! We’re back at Hershel’s farm where Lori, queen bitch that she is, goes off on a selfish tirade about how life sucks and it would be better if it all ended.   Some of the points she made, I kind of agree with.   In this rant she shows more forward thinking than most of the characters.   What’s the point of living in a dead world?   Rick waxes poetic about Jenner and a deer and this seems to fix the problem.   Bottom line, you already made the choice to bring Carl into the world.   It was a different world for sure, but no different than Neanderthals living through the ice age.   It’s too late for the 52nd trimester abortion.

Meanwhile at the fortress of solitude!   We check back in with Otis in Shane in case you forgot they were here.   You didn’t?   Ok, well we’ll show you 5 seconds of them running anyway.

Bam! We’re back to Carl waking up.   He talks briefly about how cool the deer was then he starts shaking like Glenn watching Pokémon.     Rick gives him more blood.

Sneak Attack Shift.   We head out to the forest where we see Darrell and Andrea enter a small campsite.   The previous inhabitant of the site decided to hang himself after some Oscar Wildesque poetry.   Darrell uses this opportunity to make Andrea puke, what a charmer.   He chalks that up as penance for Andrea not thinking he’s as awesome as he is.   We once again delve into the past and rehash Andrea’s disposition on life.   Just like Darrell, we don’t much care, we’re just pissed we have to waste an arrow … or time.

We’ve reached the half-way point of the episode and not much has happened.   It’s been mostly setup.   So far my favorite point in the episode is when I held in a dump until a commercial break.   My poo time went a little longer than planned and I missed a scene on the back end.   When I watched the replay, it was the scene with Dale and Carol, so no harm done.

Breaking News!   We encounter Glenn outside the farm house with his head down.   Maggie interrupts and we are greeted with a surprisingly good scene when we strip away the bullshit.   Glenn doesn’t have anyone to really care about.   He has no one that would leave him rudderless if they were gone.   Rick Has Lori and Carl, Shane has Lori, Carol has Sophia, Andrea had Amy, Darrell has Merle, T-Dog has fat white chicks, Dale has … you get the point.   Now that he’s met Maggie, he is starting to care about another person.   Glenn used to make runs into Atlanta because if he didn’t come back, oh well, no worries.   Now he’s got a reason to be cautious.

Shift-a-roo!   Hershel tells them that the time is near and he needs a decision, do they operate or not?   Rick then uses a very good argument to sway Lori’s thinking … too bad he phrased it like an idiot.   This is all you had to say, “There’s beauty still left in the world, it isn’t up to us to choose for Carl.”   Apparently all the beauty in the world is encapsulated in a single deer.   I think this is how one of those Potter movies ended.

Go Go Gadget Scene Change!   We return to Shane and Otis rolling around on the ground and nursing injuries.   I haven’t seen a rolling giggle fest like this since Manny Ramirez was the Red Sox’s left fielder.   In case you didn’t get it, they are in danger and might not make it back to the farm with the medicine.   Except that you know they are going to make it back, so there’s no tension.   Shane makes it back and everyone is happy … except, didn’t he forget his 300lb side kick?   I didn’t go take a dump again and miss the scene where he bought it did I?   I will admit, I was nodding off and thinking about getting back into collecting cherubs, but there’s no way I missed it?   Oh well, like every other scene in this episode, it’s turning into a bigger mess than a game of Jenga with Ozzie Ozzbourn.   Anyways, See ya Otis, we hardly knew ya.

Scene Shiftiftiftifitifti … (Is the 6 Million Dollar man too old to reference?)   We’re back from yet another failed attempt at finding Sophia.   At this point, do we as the audience care?   I mean, it’s not like it was a central character that we’ve cared about.   Seriously, I care more about them finding Merle.   We also use this point to resolve Andrea vs. Dale in the case of the missing gun.   We do get a nice scene where Andrea says that she’s going to try not to kill herself.   Ohhh, how sweet.

I’m out of scene shift gags.   Seriously, there were more cuts in this episode than an emo high school girl looking for attention.   So anyway, we get back to the bar and Starbuck is having a flash back.   She apparently is having a hallucination of a piano player that may or may not be her father.   It was a very touching scene.   Wait a sec … hold on, I’m sorry, there are so many story lines to following this episode that I forget what show I was watching.   Oh yea, Hershel apparently sent the land speed record for pulling shrapnel out of a child.   Seriously, did they even set the shit they got up?

Thankfully we only have a few minutes to wrap this ending up.   A big theme through this episode was making amends.   Andrea has to make amends with the fact that she’s alive.   Dale has to make amend with Andrea for making a tough choice for her.   Otis went with Shane to make amends for shooting Carl.   T-Dog had to make up for the fact that he steals time away from other characters.   I don’t care if it was only a few seconds this week, I want him gone.   Lastly, Shane was trying to make amends to Lori for acting like a love sick psychotic puppy.   It seems like the tension between the two characters is over.   However fear not, our brooding hero has a new internal conflict to conquer.

So here we are, back where we started.   Shane notices that he’s missing a chunk of hair.   I thought it may have ripped off when the zombie grabbed him before he fell out the window.   We see Shane scramble around looking for something, hair clippers.   This scene was great.   The cutting back and forth between G.I. Shane and he and Otis running from the herd was well done.   I figured something nefarious had happened to Otis, as “killing” a character off screen is a sure way of having them come back later (I’m looking at you Merle).   However, I didn’t think Shane killed him as a distraction to get away.   I absolutely loved this ending of the episode.   The last 5 minutes made the previous 55 watchable.   It was like your grandmother doing 20 mph in the slow lane, then shifting to 70 in the fast lane when you’re two blocks from home.   The slow pace of the episode set up a perfect ending.

(Caff Note: There’s no screen caps this week because I haven’t gotten a chance to do them for the Dude. I haven’t caught the episode yet, and I wanted to get this up ASAP. [That’s what she said.])