Archives
« Jim Lee Does Spy vs. Spy. Match Made In…Madness?
Sony On PSN Attack: Customers Woke Up, We Made Money. Ah, Tact. »

THIS WEEK ON The Walking Dead: Bloodletting. 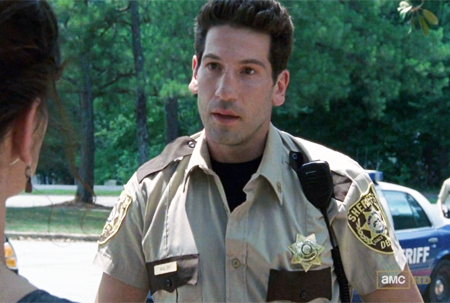 This week’s episode starts with a flashback.   It takes place on the same day that Rick gets shot.   Initially this scene disturbed me.   Not because I’m emotionally invested in the characters.   Not because I felt for Lori as she has to tell Carl that his dad was shot, and then explain the possible consequences.   Its because I don’t want Walking Dead to be like LOST.   I don’t want flashbacks.

Part of the mystique about the comic and now the show is that you walk in knowing nothing of these characters.   Normally this would piss me off.   However all of these people are facing a situation that is so alien to the people that they used to be, that it’s no longer relevant.   It’s who they are today and tomorrow that matter.   Glenn used to deliver pizzas, but now he’s a world class scrounger.   Dale used to sell poison milk to school children, but now he drives an RV and looks after everyone.     Andrea used to be a skydiving instructor, but now she walks around muttering to herself about lost guns and suicide.   Ok, so Glenn delivered pizza, but I made up Dale’s and Andrea’s job.   The point is the situation makes the man.   I’m not interested in who these people were, only who will they become.

We meet Hershel Green and family in this episode.   Part of Hershel’s group is Otis, the man who accidentally shot Carl.   Hershel has managed to ride out the zombiepocalypse on his family’s farm.   Not so remarkable when you think about it.   How much foot traffic does a small farm in the south get anyway?     Hershel shows that he’s got some medical training and goes to work on Carl. 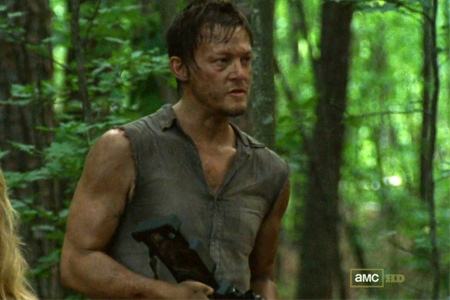 Meanwhile the Fellowship of the Useless are walking back to camp.   Darrell is Aragorn, Glen is Legolas, and the rest are the fucking hobbits.   They start getting all mushy eyed and I’m pretty sure the women started synchronizing their cycles.     They reassure Carol that Sophia is in their prays.   Darrell then calmly explains that prayers won’t find Sophia, he will.   At this point of the episode, Darrell is still awesome.   We’ll be checking in with him periodically to make sure he stays that way.

Back to Rick and Carl, we see what the initial flashback was supposed to alert us to.   Rick gets pissed and yells at Hershel as he’s pulling shrapnel out of his son.   See what you’re supposed to notice is that people fight for what they care about.   In the opening scene Lori laments that Rick doesn’t yell at her even though she knows she’s being a bitch.   Woman “logic” states that this means he’s not willing to fight for the relationship, he just wants to make peace and move on.   Either that or its Rick’s way of saying that Lori isn’t strong enough to stand up to him, so he offers her a dignified out by not fighting at all.   However when Carl is in trouble Rick will go to war.   Crazy, I know, but that’s how some women think.

On a side note, did anyone else think Shane was going to grab Rick and plant one on him hard enough to make his toes curl?   I know they’re best friends and all, but I though the “partners” was on the job.   Respect the personal space. 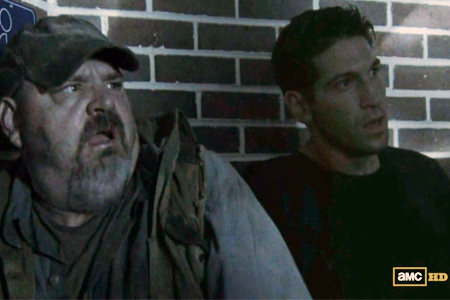 So Shane and Otis form a plan to go get the medical supplies.   Since Otis is a former track star, this is going to be simple.   Ahhh, I love sarcasm.   Seriously though, it’s nice to see Pruitt Taylor Vince in the role of Otis.   He plays out of shape overweight guy to perfection … regrettably I would know.

Before they leave, Rick offers his gun to Otis.   It seems to me that in a zombie infested world, the last thing I would want to be is unarmed.   I don’t care that I’m in a zombie free farm with the fucking care bears, I’m not giving up my piece.

Have I mentioned how useless T-Dog is?   Just the fact that his name is T-Dog pisses me off.   Well, he didn’t win any points with me by running his mouth about how he and Dale were left behind because they were weak.   This is why he’s an idiot.   He suggests that they run off and leave the others.   If it’s true that they are weak, why the fuck would you run off on your own.   If it’s not true, then you’ve got nothing to worry about.   Especially from the people that have saved your ass more times than there’s been episodes.   Alas, we learn that he’s delirious from fever.   I hope it kills him. 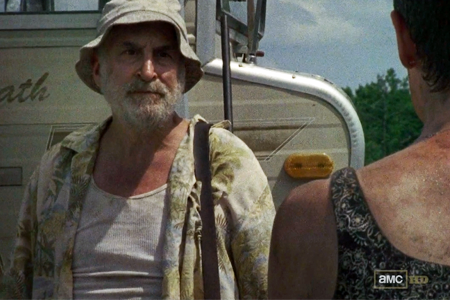 Dale’s decision to keep Andrea’s gun back fires.   If you didn’t see something like this coming, shame on you.   As she screams and squirms her way away from a walker, you can see her thoughts on her face.   “Fuck Dale, Now I’m gonna get eaten cause that old fuck wants to put his wrinkled dick on my face.”   Later on when she gets back to the RV, she gives Dale that “This ain’t over” look.   This story line bores me and I’ve talked about it more that I care too.

Maggie doesn’t do much in the comic.   She’s there, but she’s background, so it was nice to see her show off her polo skills.   As she quickly explains her purpose there, Darrell shows that he’s still awesome.   He leads the group back to the RV, no doubt relieved that he’s got one less idiot to cover.

Hershel has a very different view from Rick and the others about the state of the world.   For all his life experience, he’s rather ignorant to the new world.   This ties into my earlier point about it not mattering who these people were.   Before the end of the Earth, I’m sure Hershel was a wise man who was looked to for answers and was probably right.   Now he’s more lost that most.   He hasn’t been out in the world since it changed.   His nativity is something that will cost him dearly. 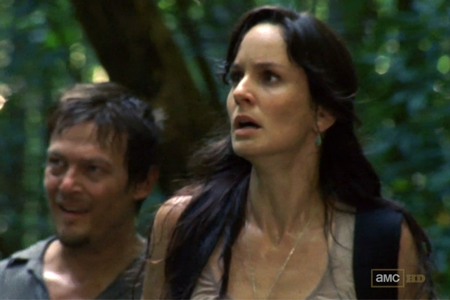 I still hate Lori.   However, I will admit that it took guts to get on the horse.   The only pieces of information she had was that this woman knew her name, and the names of her family.   The shot that rang out could have taken down Rick and she could have interrogated Carl as to where the rest of them were.   When she gets to the farm, she starts giving Hershel shit for not being a “real” doctor.   Look, if I don’t have a surgeon on hand, I’ll take a vet number two.   The man has to know how to help a dog, a chicken, a cow, and so on.   Also, it’s not like he’s removing a tumor.   Removing a bullet is pretty standard no matter what creature you’re talking about.

Back at the RV they have two main problems.   Sophia is still out there and T-dog needs medical attention.   Obviously I think the solution is to butcher T-Dog for bait to lure the zombies to a different location and then burn down the woods so Sophia runs back to the RV.   Somehow, I don’t think that’s going to happen.   Dale tells Glenn to get T-Dog to see this doctor fellow they’ve heard about as he needs medication.   Darrell, who at this time remains awesome, pulls out a big bag of drugs.   Its seems like every time someone has a problem that they can’t face, Darrell solves it in a matter of seconds.   Likes it’s a pure afterthought.   I would be surprised if Chicken Little runs through the next episode yelling about the sky falling.   Darrell will of course offer refuge and tell them that the fox was going to eat them.

We end this week’s episode at the FEMA camp outside a school.   I thought it was a neat idea to lure the zombies away from the building by using road flares.   This plan was foiled due to the fact that they only lured them about 25 feet away from the building.   Also, I thought it was a bad idea for both of them to go in the building.   If Otis knew what they needed, and Shane is a police trained gunman, their talents naturally lead to one going for the objective and one to cover.   Well, whatever my humble musings are, it went down the way it went down.   Shane and Otis are stuck behind a metal shutter just waiting for the bolts to give out while Carl slowly dies awaiting the supplies.

Overall I dug the episode.   The story is moving forward at a good pace and seems focused.   I’m excited to see what next week’s episode holds.