‘Party Down’ Movie Shooting Next Summer? Please No. 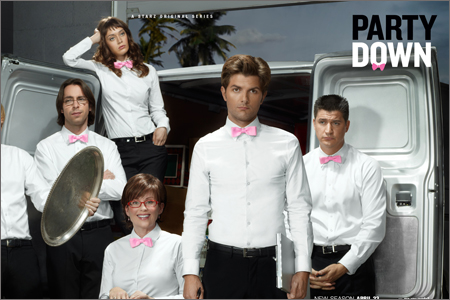 Party Down is one of my favorite shows. There has been talks of a movie. While I care about the characters, and hope the cast of the show financial wealth, my response to there being a movie shot next summer is: please no.

One beloved show that’s been promising a possible feature film sequel is Party Down, Starz’ terminally underwatched series about the comical goings-on at a catering company in Hollywood. I’ve been kinda skeptical about this project actually getting off the ground since it was first announced, but it seems the cast and crew involved are more optimistic than I am. In a recent interview, star Adam Scott revealed that not only is the Party Down movie coming together, it just might begin shooting next summer. Read his quote after the jump.

The Playlist caught up with Scott at TIFF, where the actor was promoting his new film Friends with Benefits. According to Scott, the Party Down movie is very much happening:

We’re like 90% there, we’re hoping to do it maybe next summer, if everyone’s schedules work out and the guys get time to write a script… They have kind of a skeleton of a story worked out so we know where it’s going to go but we just have to kind of cross the t’s and dot the i’s, or something. But Starz are being super cool and they’re going to let us do it, and we’re all excited, we all want to do it.

I thought the show ended perfectly. A fitting coda that pushed the characters in an interesting direction, and left the viewer to extrapolate and hypothesize about what may have become. I may even enjoy the movie (I will, I’m a sucker), but it seems extraneous. You seldom get a chance at perfect endings, why jeopardize one.