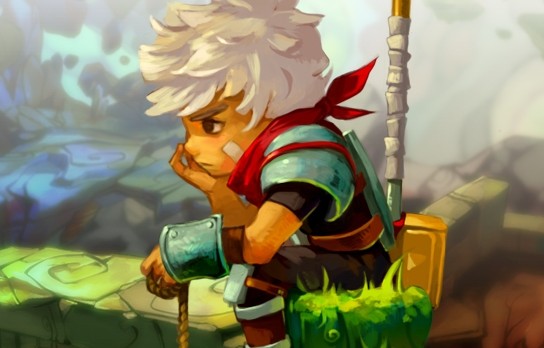 Stories are wonderful, aren’t they? Especially when the storytellers get it right: weaving tales of intrigue, fantasy and human nature. If it weren’t for our ability to tell stories, then we would know hardly anything about ourselves. Bastion is a game that knows this all too well: building on narrative foundations rather than mechanical ones. This isn’t a story within a game, so much as it is a game within a story.

You, playing as the enigmatically-named ‘The Kid’ wake up on a floating island of debris: a make-shift abode amongst clouds of rubble. Stirred by your narrator’s voice, you push forward and onward still, as you discover where the ground went and what role you are meant to play. Every action, each upgrade and any progress you make is vocalised by your persistent, Sam Elliot-a-like narrator. This, is at the core of Bastion’s experience, but it walks a fine line between being a mere gimmick and a strong, central mechanic.

Call me a stickler for tradition, but I just can’t abide it when games sacrifice their mechanics for narrative pretensions: as if we’re all still struggling to be taken seriously by ‘The Arts’. Or as if the only way games will ever be considered as ‘mature’ is if they come replete with life-affirming, witty narratives. Bastion feels like the epitome of this mentality: a game so focused on its story, that, at times, it feels as though it lost sight of how we were meant to play it.

Bastion’s mechanics are far from lazy. In fact, I feel bad for suggesting that they were forgotten. Yet every time I fall off the scenery, struggle with a less-than-fluid combat system or wade through slightly arbitrary RPG-lite elements, I get that sharp smacking sensation in my brain: reminding me that this would have been so much better if a storytelling gimmick wasn’t the lynch pin of the game’s appeal. In an age where even my shooters offer the prospect of levelling-up and skill trees, I need far more to convince me that a game is a genuine RPG, with ‘depth’ and not merely a focus-group developed maelstrom of contemporary ‘hot’ design elements.

In spite of all this, however, Bastion manages to make itself utterly enthralling. It is a work of beauty; heartfelt, distinctive and ambitious. Beautiful art direction and a captivating soundtrack make this much more than the sum of its parts. Were it not for its sense of ambition and a genuine creative spirit, my cynicism for this game would be much easier to come by. Sometimes, you can just tell that the team at work had the best intentions, that they wanted to make their vision come to life as accurately as they could. Bringing to life the game of your dreams is never an easy undertaking, yet, with their debut, Supergiant Games have come pretty close. Gimmicky though it may be, the narration is solid, at times amusing and always soothing. On repeated plays this may lose some of its lustre, but on first listening, I was compelled to take heed of those deep, resonant tones.

The ruined world of Caelondia is a rich, detailed environment, both diverse and cohesive: never failing to please the eye. The same goes for the character design: richly-detailed, anime-influenced and steampunk-esque, the characters of Bastion are all at once empowering, believable and adorable.

The gameplay’s greatest, most distinctive hook, lies in replay value. The option to start a New Game+ (allowing you to carry over your gained experience) is at the core of Bastion’s ability to keep you interested. Beyond its run-of-the-mill combat and tried-and-tested enemy types, Bastion allows you to tailor your own level of challenge through the various Gods that can be invoked at your temple in order to provide different combat modifiers. For anyone so enthralled by the story that they want to witness each possible outcome, there is certainly enough variety and customisation within the gameplay to support such a move.

With replay value, lush visuals and unique storytelling at its heart, Bastion should be one of the strongest of this generation. If you have the time, Bastion is rewarding, memorable and, most notably, ambitious. For all of my misgivings, we should remember that this game will set you back little more than around £10/$15 and that this budget title offers more heart, imagination and replay value than most fully-priced retail release can claim. If we celebrate it for nothing else, Bastion should be heralded for what it provides within the constraints of its format.

If you enter Bastion in search of deep, satisfying gameplay, you may come away malnourished and slightly jaded. If, on the other hand, you are looking for an enthralling, richly detailed world and a unique approach to story-telling then you may have found what you were looking for.

Stories that come from the heart are-in my humble opinion- the best sort. Themes about mankind’s destructive nature and our turbulent relationship with mother earth will resonate with Hayao Miyazaki fans and eco-nuts alike. In spite of my zealous beliefs in tradition and mechanics, I cannot deny that, as a story, Bastion is one that should be shared. Like all the greatest tales, it should be passed down through generations, capturing the hearts and imaginations of both old and young alike.

If the strength of a story lies in its ability to be re-told through the ages, then I, your humble narrator, am in no position to call it just yet.