[DEFEAT. is a   coming-of-death novella. every week a new episode pops up, accompanied by full art by Brian Galiano. for fans of science fiction, fantasy, video games, comics, war epics, and feats of triumph]

Bursting into tears, the girl ran into her father’s open arms. She was seven years old and learning about the unfortunate end of life. Death. She was learning what it felt like to watch a loved one succumb, to fall victim to the force by which we are all eventually swept away.

He wasn’t her brother. But he sure felt like it, having been there for the duration of her entire short existence. From the very first day Betty brought her home from the hospital, the seven-year-old had been loved and protected by this surrogate-sibling. And now she had to watch as he withered away into nothing.

“Daddy, why is this happening? It isn’t fair! I don’t want him to die!”

Stoically taking a rip from his pipe, the father looked at his only child. He was challenged in a way that was new and unnerving. Which was saying something, given the scope of his life experience.

He had survived war. He had moved to America with nothing and made something of himself. He had mastered the arena of political science, becoming the department head of a prestigious university.

And he had done all of this with self-assurance, an unwavering belief that the path he had chosen was the right one.

But now he wasn’t exactly sure what to do. He gently parted his lips, allowing for a light puff of tobacco smoke to billow upwards. The father savored the taste of the smoke and anticipated the rush from the nicotine. This was his ritual when preparing to do some heavy-duty–

“Daddy,” the daughter interrupted, “isn’t there anything we can do?!”

“I’m still doing zee heavy-duty thinking.” He hadn’t completely shaken his accent. Years later, when his daughter realized he had an accent, she’d find it endearing. But right now, she just wanted a solution to what had been described to her as an insolvable problem.

She had heard the word from all of them. Her mother. Her father. The doctor. They all had different ways of explaining what it meant. The maternal optimism that everything would be fine, despite what the word suggested. The paternal idea of confronting the inevitability of the word, becoming stronger in the process. The scientific defining of the word, plagiarized from a textbook. Yet, nothing curbed the inherent terror of the utterance.

Evelyn, still clutching her father’s side, whimpered softly. Lukas scooped up his daughter and carried her over to the couch in his study. He laid her down, patted her head and told her to try to relax. She listened, wiping away the tears and closing her eyes, waiting for a miracle. He sat down, hoping to think of one.

Lukas took his seat in the study’s oversized leather chair. Taking a cue from his daughter, he closed his eyes. Leaning back, he chomped down on the stem of his pipe and used his newly liberated hands to rub his temples. He was upset. His daughter, the apple of his eye, was experiencing death for the first time in her life. Betty, his wife and sweetheart, well, she was on the verge of collapse. Hell, someone she had loved as though he were her own child was about to die.

I have to figure this out. How can I make this right? What can I do to conjure up some hope?

And then he realized.

The little girl noticed that something was different about her father’s countenance. “Daddy…are you okay?”

“Ja! Yes! Better than oh-kay! Close zee door, we need to speak and I’m not sure zat your mother would want to hear.”

Evelyn hopped off the couch and slammed the door with fervor. Her father’s excitement was dispersed throughout the room and Evelyn couldn’t ward off an infection. “Daddy, tell me!”

“Child, you must be more quiet.” Though the words were stern, Lukas proffered them with kindness. “Again, what I am going to tell you must stay between the two of us. Your mother…well, this is a story she does not want to hear.”

“Because I haff tried to tell her before. This story takes place during zee Second World War, and zat is a time she does not wish to relive.

“As you know, I did not grow up in this country. I came here after World War Two. But before I could come here, I had to do a great deal of traveling.”

“Patience, my child, I’m explaining. You see, I was born in a country called Germany. During World War Two, my homeland was an enemy of the United States. Did I agree with the direction my country was heading? No. But I had to join the army anyways. My father was a military man and he would have disowned me if I had refused.

“To make a long story short, dear Evelyn, I ended up deserting.”

“Desertion is when someone leaves a job without being told that it is oh-kay to do so. I was…unhappy with being in the German army and so I ran away. But before I could come to the United States, I had to visit some other countries.”

The little girl was on the edge of her seat, compelled to hear this new information about her father. For a moment she had completely forgotten about her dying friend. Only a moment.

“Daddy, what does this have to do with anything?”

Lukas chuckled at his daughter’s candor. He took another rip of his pipe and continued. “As you will likely see for yourself someday, when you travel zee world you meet all sorts of interesting peoples. To understand zee world, you must see zee world, if you can follow.”

As though peering into another time and place, Lukas’ eyes were no longer aimed at his daughter, but beyond her. Remembering, he continued, “During my adventures I encountered some…unusual individuals. Some of them were runaways like me. Others were miscreants, people hoping to swindle me out of the very little I had. But many of them were unique and different and quite unlike anyone I had ever met. Yes, in the course of my journey I met some fascinating characters…

“One of them was a man…a very wise man. I think it was in Portugal or Spain…I was exhausted and had fallen asleep in an alley. I had taken to this practice, sleeping amongst zee outcasts and homeless. After all, I was fleeing from zee most tyrannical regime in history. I was paranoid, convinced that giving anyone my name — such as a concierge or hostel manager — would mean imminent death.

“Neverzeelest, when I awoke, I was in a small flat…I had no clue how I got there. To this day, I am not sure precisely how I traveled three flights of stairs while asleep. Shortly after waking up, an old man brought me food and drink. He introduced himself only as a friend and never told me his name. I was so grateful to have been taken in that I didn’t ask. Again, with names, I was no rush to ask for another’s as it often means lending your own.

“Truthfully, I cannot recall what he looked like, exactly, save for the fact zat he wore a gray suit. And, my dear, zat his smoke-colored suit was completely immaculate. Even in a dingy flat, with panels swinging from zee walls and dust lurking under every fixture, zee suit was unsullied. It was as though…as though he could not be touch by the material world.

“This old man did not say much to me, but from zee few words he offered I gathered zat he was intelligent. No, more than intelligent — wise. Like a philosopher or a sage. We ate some food and he insisted that I stay as long as I like. But between being confused about how I had come to be in his presence and my general trepidation at the time, I told him that I would be leaving.”

The girl, young though she was, comprehended that her father was sharing a tale of unfathomable significance. She could tell that in this narrative symphony, the notes her father wasn’t playing were just as important as those which could be heard. This event, and the time in his life which allowed it, helped shape her father into the man he was today.

“But before I could leave, zee man in zee gray suit made me promise to take something with me. He put it into my hand and said This is for when you have nothing else. When all hope is lost. When your back is against the wall and you need a trapdoor. This is resolution for the impossible.”

Lukas walked over to his desk. Out of his pocket he removed his wallet. Unfolding it, he took out a thin bronze key. This was inserted into the lowest left-hand drawer of the desk, which was in turn opened. His hand reached in and then it was pulled out – a small crystal decanter filled with a clear liquid.

There was no lamp on in the room that could have done this, but it seemed as though the decanter was acting as a prism. Strange, wonderful beams of light reflected and refracted, casting a sense of otherworldliness about. Every wavelength of the color spectrum was represented, dancing about the walls of the study with fabulous exuberance. Evelyn gasped, “Daddy — it’s beautiful.”

Lukas nodded. “Yes. It is. Now, without your mother seeing you, go get him and bring him in here.”

Quickly and quietly, Evelyn left the study. She was careful not to slam the door on her way out and even assisted the doorknob so it wouldn’t CLICK too loudly. She was gone nary a minute before she returned. With him.

“Daddy, he looks so sick.” Evelyn was beginning to get upset again, rubbing the head of her brother-in-spirit. “What can you do?”

Lukas took a puff of his pipe and set it down on his desk. He then took the stopper out of the decanter and kneeled next to the pseudo-siblings. Both seemed comforted by his presence.

“Evelyn, you might not know this, but this fine gentleman was a part of zee family before I was. Why, he helped your mother through some difficult times. Since I’ve known him, he’s been nothing but wundervoll. And I have no doubt in my heart that you love him.”   Her soft eyes widened in agreement. “We’re going to give him a taste of possibility.”

Lukas tipped the decanter, pouring the liquid into his cupped hand. He then put his hand under Reilly’s snout. “Here, boy, drink up. It will make you strong.”

To their astonishment, Reilly drank the liquid. When Lukas poured more, Reilly drank more — and with more conviction. It wasn’t long before the crystal container was empty and the dog was starting to pick his head up. Something he hadn’t done in a week.

Lukas scooped up Evelyn once again and they both smiled. So did Reilly. For at that moment they all realized that a second chance had been granted.

“If Mommy asks, what are you going to tell her?”

Evelyn’s cheeks swelled with the satisfaction of being in on a secret. “I’ll just tell her that Reilly’s a miracle.”

“Perfect. That way, you’re not even telling a fib!”

As long as a hound can lap at the water, he’s got a fighting chance. 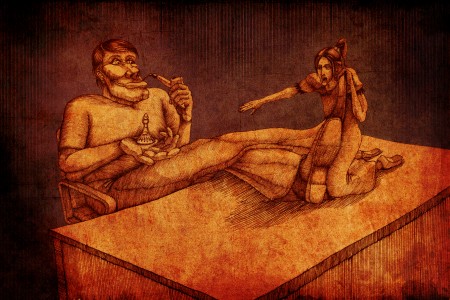