Mac From ‘Always Sunny’ Puts On 50 Pounds, For The Show. Swoon. 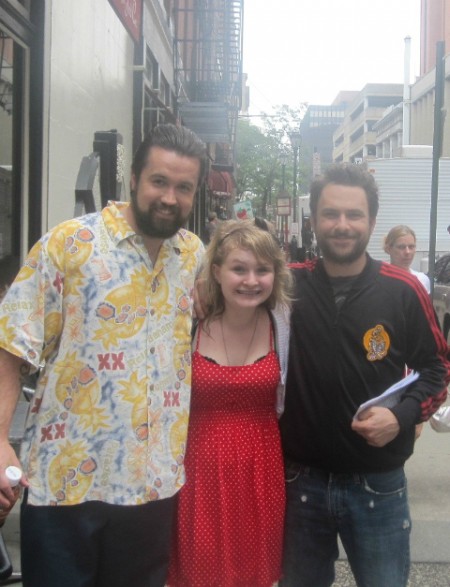 Rob McElhenney plays Mac on Always Sunny In Philadelphia. Next season, McElhenney will be an amazing 50lbs heavier, the sole reason thinking that it would be hilarious to have the bodybuilding-obsessive Mac walk around as a fat ass.

Collider has an awesome interview where the cast talks about it:

DAY: . . . Rob McElhenney has intentionally gained 50 pounds for this season. It’s been disgusting to watch him pursue this venture.

OLSON: I live with it. We share the same kitchen and bed.

DAY: We’re a little bit on the fence about it, just for his own personal health and safety, but it has definitely made Mac a lot funnier this season because he still thinks he has the body of an Adonis.

HOWERTON: In Mac’s mind, his excuse is that he’s been spending all this time building up his mass and bulking up, with the idea being that he’s eventually going to chisel it down and he’ll be this big, massive, muscular beast.

ROB McELHENNEY: When David was created, you had to first get a slab of marble, and then you chisel it down.

HOWERTON: So, you’ll see the big, fat, marble slab without it ever having been chiseled down.

McELHENNEY: I’ve actually lost about five pounds, since I put it on. I’m trying not to.

What’s been the method for you to gain all of this weight?

McELHENNEY: I was eating 5,000 calories a day, which is a lot. Every day, I drink a huge shake with Weight Gainer and ice cream, and I eat donuts.

DeVITO: We send him a lot of cake.

What was the reason for this?

McELHENNEY: I was watching a very popular sitcom and noticing about how the characters were getting better looking, as the seasons progressed. And, I have never seen a sitcom in which the actors progressively got worse looking, which is, I think, truer to life, especially the lives that these characters lead. And, a character that’s always talking about putting on mass and all he does is eat shit and drink beer would eventually look like this. I thought that would be an interesting experiment, and it seems to be working out.

I can’t fucking wait. I thought the last season was uneven. Some episodes were meh-tacular, and others struck a chord like the older seasons. Whatever the quality, I always enjoy spending 22 minutes with the gang, and I imagine staring at Fat Mac can carry at least a couple episodes on its own.