Face of a Franchise: Holy Handmaidens! 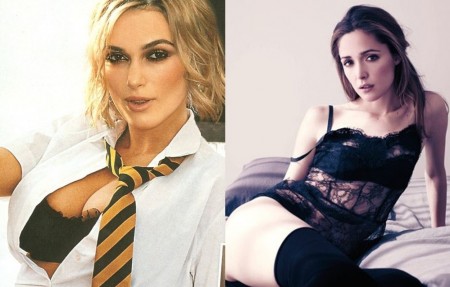 The Star Wars prequels were unmitigated disasters. Any attempt to debate this truism will be met with a polite request to leave OL. A refusal to do so will result in an introduction to the Midichlorian Masher – a butt-paddle we bought at the local state college’s annual auction of confiscated contraband.

But if any silver lining can be found in the dark cloud of that abysmal trilogy, it’s the fact that it gave us our first glimpses at some folks we’d have trouble taking our eyes off of years later. No, not you Ahmed and Hayden, you guys can gently drift back into obscurity! Thanks!

The parties in question are, in fact, two fine-ass babes.

One of the shocking twists in 1999’s The Phantasmagoric Menacing Tattoo-Face is that Padme isn’t a handmaiden of Queen Amidala, she is Amidala! Oh SNAP! But, wait – huh? Then who is that in the face-paint? Well, that’s  Sabé, a handmaiden and decoy of the queen!  Sabé is portrayed by Keira Knightley who, although young and ghastly and unable to emote in TPMTF, would later establish herself as beautiful babe with some solid acting chops. Like those Johnny Deep Pirate-Guy flicks? Me neither. But she’s Legolas’ lady in that trilogy.

2002’s Attacking Clones also features a short scene in which a subservient handmaiden (prolly a slave, jus’ sayin’) shows genuine concern for Natalie Portman’s safety. This handmaiden is  Dormé, who everyone knows is “one of the most devoted  handmaidens of  Padmé Amidala during the former  Queen’s time as the  Senator representing Chommell sector in the  Galactic Senate” (wookiepedia).  Dormé is a product of Rose Byrne, who I just saw looking dope as hell two weeks in a row with a supporting role in both  Bridesmaids and X-Men: First Class.

Again, there isn’t much to like about the prequels so let’s savor whatever we can. After all, sometimes a tragedy is nothing more than fertile ground for a triumph to blossom. And is there anything more triumphant than good-looking womenfolk?

Hit up the comments and join me in my chauvinism.

Who do you prefer, Keira Knightley or Rose Byrne?