Archives
« Face of a Franchise: VH Screamer!
Spielberg Says ‘Jaws’ Is Coming To Blu-ray With NO Digital Changes. Dude Rules. » 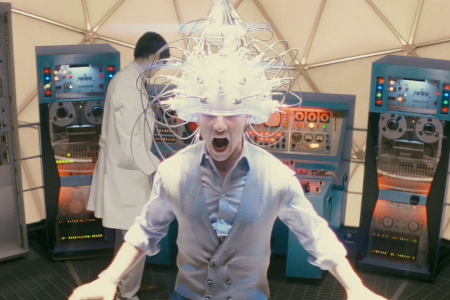 X-Men: First Class dropped yesterday, and the Brothers Omega went to see it. We’re lifelong fans of mutants and zany dudes in wheelchairs, so we were pretty excited. What’d we think of the movie? What’d you think of the movie? Hit the jump to join in the fun. 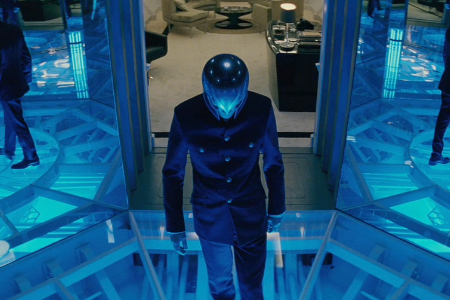 X-Men: First Class is legit. That’s really all you need to know. In a week where DC announced it was rebooting, no uh, rehashing, no uh refrying, no uh relaunching their comic book line, First Class arrived on the movie mayhem scene with little to no fanfare. Which is a shame. ‘Cause as DC and Marvel try over and over again to tell us the same origin stories, serve us the same side of Refried Pathos, First Class throws a filthy curveball at expectations and it buckled my knees with pleasure.

Matthew Vaughn and the rest of the wizards behind First Class milked my glands when they set my favorite comic book franchise deeply in the middle of my favorite period in American History. Jettisoning placing this pig in the usual modern day setting, they did the unthinkable and set the flick and its Civil Rights allegory deep in the heart of the Civil Rights movement! Go fucking figure.  The result is a movie distinctly different from previous entries in the film monolithic film franchises. This isn’t Singer’s X-Men, it certainly isn’t that heaving pile of Wolverine excrement. It’s something different, and for that I’m pretty fucking thankful. It’s nice, it’s neat, and it still manages to hit most of the important beats that us fanboys feign for.

It’s nice to see what can happen when you’re not ruthlessly beholden by continuity and marketing. The movie has the leverage to try new concepts without worrying about general reaction. Alex Summers? A floating pixie lady thing named Angel? Who the fuck is El Diablo Nightcrawler? Kevin Bacon! Where’s his cock?  There’s also the lovely fact that they didn’t have to shoehorn in fifteen different Avengers cameo to work the marketing wunderkind aspect. It’s amazing what happens Marvel just throws a few million at you and says “Make this movie!” The amount of Not Giving A Fuck that Marvel has about the flick can only have helped it.

The movie sails on the relationship between McAvoy and Fassbender. It’s essentially a fucking love story between two dudes, and if you’re not getting that, I weep for you. It’s the love story we were deprived of in the first trilogy. What we got was two dudes feuding, yet we never understood the tragedy that took place to drive them to such an enormous ideological divide. As Fassbender lovingly caresses the dude he has deformed before leaving forever, there’s  some real Freudian shit going on. Yet it’s tragic, and as they come to the crossroads, you feel for it. Despite building it up in a rushed two-hours and some change, you feel the Mags/Chucky split in ways Lucas could only wish he executed with Kenobs and Vader.

Both of them put in excellent performances, though I have to say if we’re commenting on the homo in Freudian moments, my loins swell for Fassbender and his performance as Magneto. I could have watched him avenge his concentration camp childhood for an entire movie.

The flick isn’t perfect, and they try to cram an obscene amount into one two-hour package. As the movie was beginning I was worried it was sprinting along too quick and it wouldn’t slow down. The opening installations of backstory cutting quickly between Xavier and Erik had me hoping they’d slow down and let shit develop. They did eventually. To an extent.

My final critique is perhaps only my own, but I wished they never took fully to executing the origins. Does Erik really need to be called Magneto at the end? The movie shined because it was fucking cool, and a dickbag in a cape and helmet is not cool. At least they had McAvoy laugh openly when it was suggested he call his team the ‘X-Men.’

Overall? Despite its flaws I loved the fuck out of the movie. It’s memorable in how it differentiated itself from the pack of comic book origin stories by daring to take the pig into a period piece, and throw different looks at established characters. 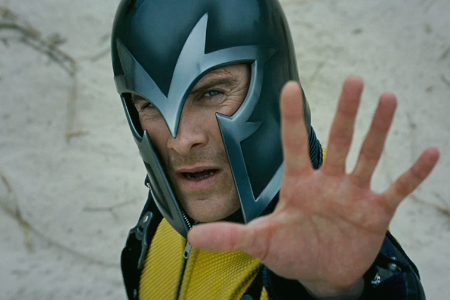 A number of thoughts pranced through my head as walked out of the theater last night, including Holy crud, that movie just set the bar pretty fuggin’ high for Blockbuster-Summer and I wonder if they’ll sell me a trash-bag’s worth of stale popcorn at discount? Hunger pangs aside, the prevailing post-viewing thought is that X-Men: First Class is great flick, straddling the line between what comics fans want to see and what casual moviegoers need to get their juices flowing.

Sure, there’re are plenty of characters and references that’ll make the uber-dorks amongst us pump our fists wildly. For example, I think you’ll be hard-pressed to find an X-Fan who isn’t enamored of Nicholas Hoult’s portrayal of Hank McCoy. I, for one, thought he nailed the brainy scientist, and I’d be lying to say that I didn’t full-on nerdgasm after the transformation into Beast.

However, the   inclusion of such fan service has to be tempered with situations with which the average viewer can sympathize. Matthew Vaughn clearly understands this, as the crux of X-Men: First Class is found in Erik’s undying quest to avenge the deaths of his parents and his people. Michael Fassbender shines as the pre-Magneto who traverses the globe and executes his own brand of vigilante justice.

Truthfully, Fassbender delivers the best performance of the film as he confronts a pair of Nazis who’ve escaped to Argentina. Not unlike his work in Inglorious Basterds, Fassbender helps maintain a suspense during the confrontation that is bound to put your ass on the edge of your seat. Even if you side with Professor X in the mutant ideological struggle, you’ll feel for Erik and understand how his abuse at the hands of humanity has informed his perspective. It’s chilling stuff.

If I were to have any grievances about First Class, it’d be that performances such as the aforementioned are so stellar that they overpower some of the others. Sure, seeing Banshee whip around the skies with his hang-glider outfit is sick, but I found it hard to be fully invested after watching the most infamous mutant of all time try to resolve childhood trauma with supreme violence. Again, it’s a minor complaint and by no means should it dissuade anyone from checking out the movie.

While dropping in references and cameos and all sorts of tidbits that only the most omega of fans will appreciate, X-Men: First Class still manages to be a well-rounded popcorn flick. With its stunning visuals, commendable performances, and captivating action, I think the movie will be a good time for anyone who isn’t a curmudgeon with weird-shaped balls and bad breath.