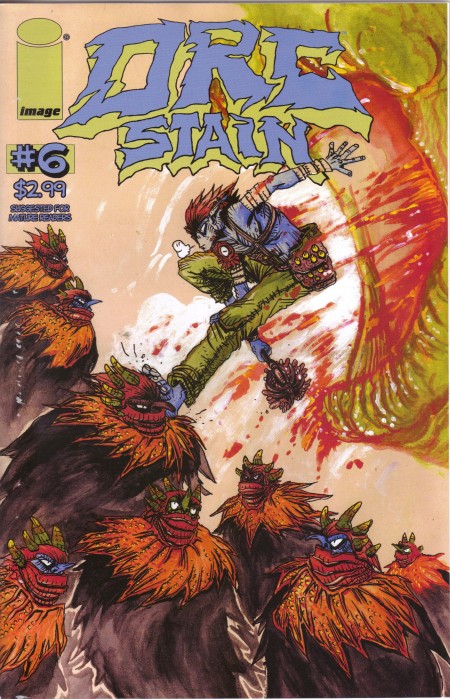 The fact that Orc Stain is written, drawn, and colored solely by James Stokoe is fucking ridiculous, a wonder that should be put on the same level as the creation of penicillin. What’s that, you’re wondering why I’m spouting such hyperbole? Well, the simple fact is that in addition to having the most imaginative plot I’ve come across in eons, this book’s visuals are absolutely jaw-dropping.

What exactly is the story thus far? Well, it’s like this — orcs run rampant all over the world. They pretty much call the shots despite the constant relinquishing of power from one tribe to another. However, the blood-thirsty Orctzar has sworn to unite the factions through any means necessary, meaning beheadings and de-dickings). Of course, the soothsayer he approaches for advice tells him that his efforts will be futile, even if he manages to find the one-eyed orc capable of unlocking a prize of great power.

This brings us to the exploits of an ostensibly benevolent orc (aptly) named One-Eye. He’s a looter with unreal locksmith abilities — not only can he unlock vaults and safes, but a single stroke of his hammer sees the crumbling of buildings and even living beings. He’s a peaceful guy for the most part but has gotten caught up in some serious shit. It’s the classic “good guy has to wage war” tale, applied to motherfucking orcs.

Stokoe is a narrative alchemist, taking whimsical elements of fantasy and transmuting them into something that new altogether. Orc Stain doesn’t take itself too seriously, but it’s no children’s tale — nearly every other page features somebody getting a goddamn body part lopped off. And it’s not unusual for the recently-detached portion to be a dick. In fact, in Stokoe’s mythology dicks are called gronches and they’re collected from enemies so as to be used as currency and medals of honor.

This sixth issue continues One-Eyed’s tale, showing his efforts to break out of a combination mountain/beast/prison. Yeah, you didn’t misread that and it’s exactly these off-kilter creations that help set Stokoe apart. Of course, such insane devices only work because Stokoe has the illustrative skills to pull it off. Every panel is a hallucinogenic cartoon wonderchild, with the colors that bleed out of cough-syrup daytrips, onto the page, and then into the reader’s mind. Moreover, there is so much detail in every single image that one begins to question whether Stokoe has seen daylight recently.

My guess is no and if that’s the case, I appreciate the artist’s efforts.

While I’ve been on board with this book for awhile now, I think this latest effort really ups the ante in terms of baiting an emotional investment from me. In two giant-sized, double-page splashes, Stokoe adds a twist to Orc Stain that changes the very nature of the story. No longer is One-Eye is a regular dude who’s getting caught up in warfare and prophecies. Instead, we come to learn that he has a past with the Orctzar’s right hand man, a bearded dude named Beard. There’s still plenty to figure out, but it seems that our protagonist might have a bloodfeud of his own.

Orc Stain is badass, there’s no two ways about it. But this book as soon as you can. Then, blast some SYL and give it a read.

You won’t be disappointed.