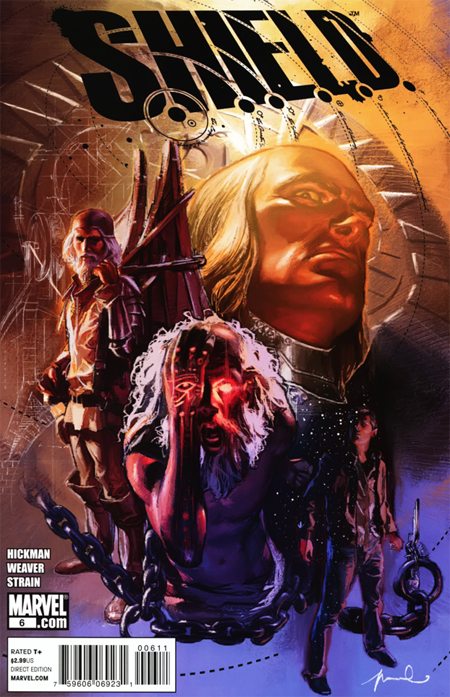 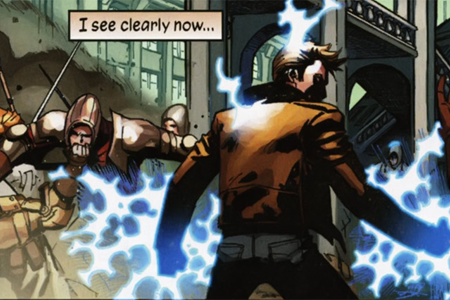 This issue of Shield sees the final battle between Isaac Newton and Da Vinci get underway. Blood is shed, bodies thrown limp and aside. While the catastrophe builds within the Immortal City, young idealist Leonid looks on in horror. He has been raised to view two sides of the same coin; the predeterminist nature of Newton, and the free will espoused by Lenny.

While I’ve read through the series so far rooting for Da Vinci to rout Newton, that alien-fucking prick, in this final issue I came to realize just like Leonid that I had been duped. I had been sold on buying into the dialectic, the off-on, the binary construct. And just as I realized it, Leonid himself pontificates, “For years, these two ideas had warred within me. But I see now that this battle was a lie. I see clearly now…a third way.” 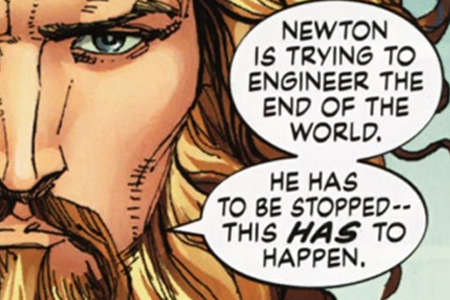 The veil fell off at a climactic moment, when Leonid attempts to dissuade the two sides from war. Conjuring a wall, an injectory third component into their battle, both Newton and Da Vinci plead with him to wrest the wall down. To cease his protest. It isn’t so much Newton’s proclamation that got my attention, but rather Da Vinci betraying his seemingly free will-minded hand. A character who has spent issues identifying himself as a man who embraces all possibilities barks at Leonid, “Newton is trying to engineer the end of the world. He has to be stopped — this has to happen.”

Just like that, Da Vinci himself sells out on his own philosophy, and the lionization of the sexy bearded fucker ends. 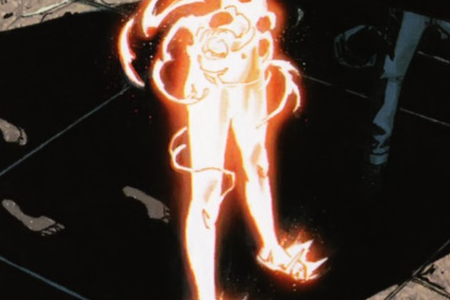 At this point, I’m covered in the bumps of geese, as Hickman’s narration compliments Weaver’s gorgeously penciled destruction, wrapped up in the collapse of the Immortal City. All good cities must crumble, it seems. All is lost, it appears.

That’s when the Forever Man shows up, and blows out your asshole with didactic awesomitude.

Forever Man apparates out of nothingness, and lets Leonid know what a burden it is, to be able to see outside of the perpetual dialectic. The either or. The yes or no. The on and off. Unlike both Newton and Da Vinci who purports to believe in any possibility, Forever Man tells Leonid that he is “untethered from preconceptions…to be open to all possibilities.” 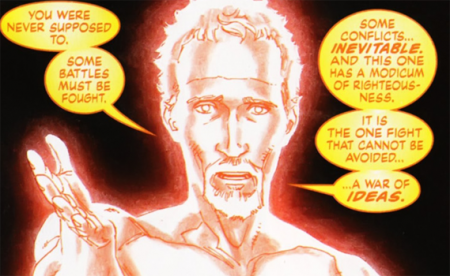 Forever Man, far from condemning the two brilliant philosophers, is aware of this all too familiar flaw. A hiccup in the circuitry even of men who have inspired the world, revolutionized the world, improved the Blue Marble. It’s simply how it fucking goes. It’s how we’re constructed.

It’s how I’ve always felt about my aforementioned philosophical kings. I can admire the inherent genius of Descartes, while still lamenting his circle. For a man who was such a wizard with logic, who dropped the brilliant but beaten to mush cogito ergo sum, he was still a man working backwards. Who was building a philosophy to support his Christianity. He wasn’t seeking truth – at least to me. And who the fuck am I? A twenty-eight year old dumb ass? But still. To me – he was seeking justification. 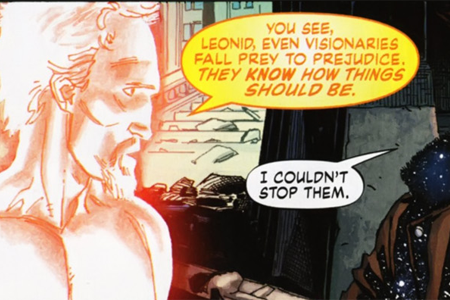 This sentiment is echoed by the Good Sir Cloaked In Amber, when he drops, “You see, Leonid, even visionaries fall prey to prejudice. They know how things should be.”

Descartes, the fictionalization of Newton and Da Vinci, they’re great minds. These great minds find stances, and then defend them. By defending them, they lose the nuance of their arguments, they have to oversell their ideas, their convictions. It’s the way it goes. As Leonid says, “They build walls around what they believe.”

The clashing of ideas, made very real within the constructs of Shield, are what give birth to change. The quite literal exchange of arms between Da Vinci and Newton are the typical comic trope of making the figurative into something literal within the pages of the comic. That isn’t to say real blood and lives haven’t been shed for competing ideologies.

Of course they have.

But out of these two ideas shall come something new, something that Leonid seems to represent. Possibilities without end, another option outside of the binary process. 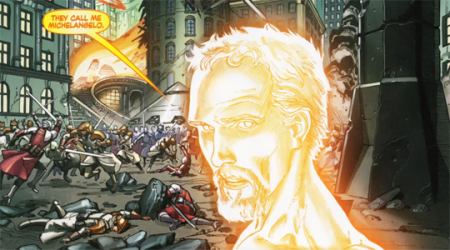 Shield #6 doesn’t solve anything, and for that I’m fucking okay. It’s the end of the first volume. Call it the end of a season, a cliffhanger for the next proverbial movie. What it lacks in battle resolution, it makes up for in its explicit explication of the philosophical gambit at hand.