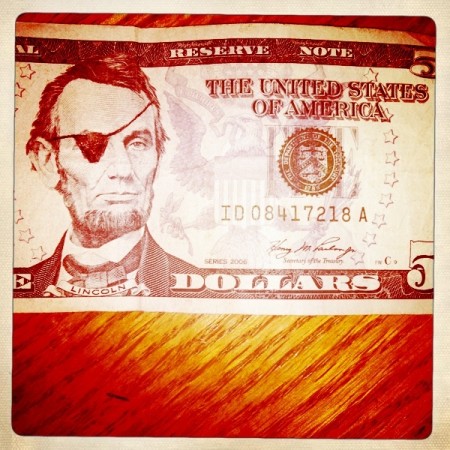 [The following is a true piece of fiction]

My friend Brad is a strange guy. To say the least. You can tell him apart from the rest of the pack because of his occasional vacations to the psych farm and his penchant for wearing sweatpants in the summer. Also, I can’t recall a time in which we hung out and he didn’t carry around a two-liter bottle of Dr. Pepper.   Hell, he’d always offer those present the chance to take a swig, but with the way he slobbers you’d have to be an idiot to oblige.

Anyways, my friend distinguished himself yet again last week as we were hanging out at Chuck E. Cheese. See, Brad’s actually quite well-off because he inherited his uncle’s entire fortune. Uncle Tommy made his money in 1980’s pornography and 1990’s cocaine, and Brad was the only family member who’d give him the time of day. Whereas most of the relatives scorned Tommy for his professional choices, Brad didn’t have any problems with coke snortin’ whores. So when Tommy croaked, Brad became a millionaire. Feeling as though accepting his uncle’s inheritance would cheapen their relationship, Brad has vowed to donate $1,000 once a week.

So every Thursday, Brad and I go to a Chuck E. Cheese with two hundred five-dollar bills. Once there, we wade through the ball pit and deposit the cash at the bottom. We then sit back and watch as the money is discovered. Some weeks it takes hours for all the cash to leave, each paper-archaeologist keeping mum about their findings. Other weeks, well…let’s just say that we’ve seen more than a few fist fights break out.

We were in the beginning stages of our Thursday routine, eating pizza and plotting our voyage into the ball pit. But I could tell that my friend wasn’t in his normal frame of mind – he was glossy-eyed, breathing heavily, and had barely touched his Dr. Pepper. Having seen these same glossy eyes peering out of squad cars, I decided to check in with my buddy.

“I’m about to change history. I’ve figured out a way that I can help shape American Mythology! I’ve been searching for years and I’ve finally found it! This is my moment!”

I waited for him to continue, but he just kept staring into the middle distance. Mouth agape. Breathing like an asthmatic trying to fuck. With his horse teeth, though yellowed, shining through his thin lips, I knew that he had stumbled onto something special.

“Alright, just tell me – you writing a book or something?”

“Please,” he spat out in between bites of pizza, “you know I can’t read. No, what I’m going to do is take the heroic and make it better, make it fucking superheroic. And it all starts today.”

Brad took the envelope out of his pocket. Looking left and right, he opened it up and removed the wad of cash. Holding it tight to his chest, he assumed the role of the didact.

“If you would, please tell me — whose face graces the American five-dollar bill?”

“Correct. Now, in your estimation, where would you rank Abe against other U.S. Presidents?”

“Hrm,” I thought for a moment, trying to pick out the response Brad was looking for. I took the safe route, “I would argue that he’s definitely in the top-three.”

“Rendar Frankenstein,” he said like a parent in reprimand-mode, “you know better than that! Abe Lincoln is the chief! No other president even comes close! Dude preserved the Union and freed the slaves and laid the pimp-hand on that floozy-ass Confederacy. Straight-up — the man died a hero. And while it might seem impossible, I’ve figured out a way to improve the legend of Abe.”

“With these.” Brad tossed the wad of five-dollar bills onto the table. Sifting through them, I saw that an eyepatch had been added to the portrait of Lincoln on each bill. Some were done in marker, others in crayon, and a few of the eyepatches were cut out of construction paper.

I laughed, “What the fuck? You want to turn Abe Lincoln into a pirate?”

“No, no, no! Don’t be an idiot,” he had taken umbrage and stuffed the cash back into the envelope. “What I’m doing is improving the Lincoln legacy the only way possible – with a fuckin’ eyepatch!”

“How is that an improvement? Doesn’t that just mean he’s visually impaired?”

“Oh, c’mon! The natural inference is that he lost his eye in a fucking scrum! Now, I’m not saying that losing an eye can make any Joe-blow a happenin’ dude…but it certainly makes a bad motherfucker that much badder. Rooster Cogburn. Saul Tigh. And now, Abe Lincoln.”

I filched one of the bills from him and gave it another look. I had to admit, Abe did look a bit more headstrong with that black swatch across his face.

I started to ask Brad how he was so sure others would accept his contribution to the national folklore, but he anticipated my question.

“And so they’ll grab their felt-tipped pens and put the eyepatches on themselves. Every child in America is going to fix their allowance. Amend their reward for raking their neighbor’s leaves. Put the new stamp of approval on the pizza money. It’s going to be ingrained into the fabric of our society — money!”

Like I said, my friend Brad is a strange guy. And he claims responsibility for the newest conception of America’s sixteenth President.