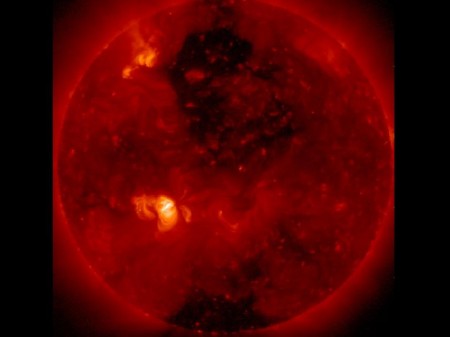 Next time I let one fly out of my cornhole and people give me guff, I’ve got the Sun on my side. NASA recently took a picture of the Sun, looking rather compromised with two gaping holes in it. These gaping holes? They’re called coronal holes, and they open up to release excess gas.

On February 1, the Hinode satellite captured this breathtaking image of a coronal hole, seen in the top center of the image. (A polar coronal hole can also be seen at the bottom of the image.) A coronal hole is an opening in the sun’s magnetic field through which gas can easily escape into space. The holes are relatively cool in temperature as compared to the active regions nearby – such as the bright region on the lower left portion of the solar disk – the cooler temperature is one of the reasons for the darker appearance.

Listen, if the fucking Sun can do it, so can I. Far be it for anyone to try and cut down on me imitating my Galactic Father, the Source of this System’s All. Right? Fucking right.