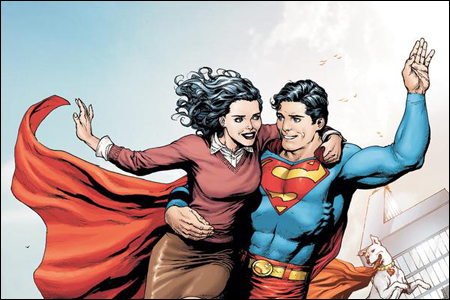 Variant Covers: guaranteed to aggrandize superpowers, outside the pants underwear, and splash pages. I spent a lot of last week catching up on the ridiculous backlog of comic books that I hadn’t touched in a while. And I remembered something: good god damn, I fucking love comic books. Seems a bit obvious, dunnit? Alas. Sometimes I get so overwhelmed with the concept of ingesting the funny mags that I forget that at the core of them are the same tireless themes that I could read ad nauseam. Aristotle rocked out in the Poetics stating that not only do us wacky monkeys with self-awareness love narrative, but we can never get full, and we seem to gravitate towards the same concepts over and over again.

I think the dude is on to something. I’ve watched Magneto get his ass owned so many times, and yet his ironic struggle towards fascism born out of his own oppression still gets me. Bravo Aristotle, we may keep you around yet.

Superman #700
Superman turns 700 this week. Good lord, that’s a lot of dialogue bubbles. Superman hits its 700th issue, and of course, like every comic that hooks a something-hundredth milestone, the issue is packed to the brim with stories, artists, blah, blah blah.

I’m bored with Superman. And I love him. That’s the tragedy really. Everyone seems to dog on the dude, and even I, who loves the guy, can’t stand him. 700 issues. Let’s do something new with him. J. Michael is coming aboard with #701, and I’m hoping he uses it as a springboard towards something new.

Maybe I’m alone in this, but can we stop jerking off a 32 year-old movie? Am I the only one who is tired of seeing Clark Kent/Superman drawn to reflect Reeves? There’s so much homage paid to it, that it feels creatively stifling to me. I’ll take Kingdom Come’s Superman, or All Star-Superman, or Superman: For All Season’s depiction of the Man of Steel any day. I get it – we all love Reeves. It’s fantastic. But I prefer the beefy bumbling Clark Kent as a farm boy to the sexy grin of Reeves as Superman that Gary Frank loves penciling.

It isn’t about a disrespect for the movie, it’s about turning the page. 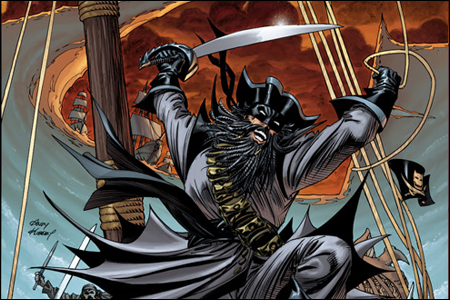 Holy shit, Batman does know how to have fun. 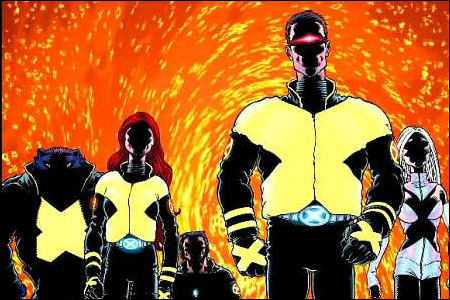 It isn’t that I’m not down for the respect of previous mythos, or character emblems. I don’t want to come off as some dickbag fanboy. I’ll just come off as…a different kind of dickbag fanboy, I guess? It’s just that, I get it: there is a certain feeling to Superman that a lot of people love. But with any character, in order to keep them fresh, it seems imperative to try new things. Even if you fall on your face and people like me end up launching keyboard bazookas at you. Hey, we’re worthless consumers, and you’re a creator, I’d say you have the edge in the long run. 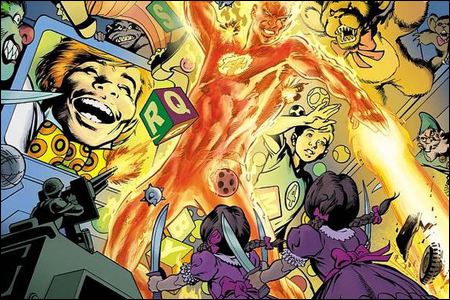 Fantastic Four #580
Every month, I recommended Fantastic Four. I’m usually rambling about it to someone. And usually they give me a look that says “Please dude, I know Reed Richards and his gang of ass-slapping family members. They’re lame.” And maybe they were. But if you’re not reading Jonathan Hickman’s run on F4, you’re missing something fucking magical. Especially the current storyline.

The book excels because every issue is both stand alone and working towards the culmination with a clash between four epic players in the Fantasti-world. You can pick up an issue, dig on it for its themes of space exploration, family dynamics, and general humor. Or you can continue reading, and watch as Hickman methodically builds the tension underlying the entire book.

Too often events come out of nowhere. Confrontations are born out of forced contrivances. But Hickman is working up to his with a deliberate pace that has you wondering when everything is going to collapse in upon itself. Something dark is coming, and with every issue that it doesn’t begin, the tension only builds. 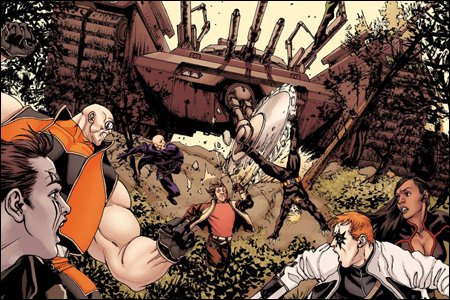 Also In The Marvelverse:
I have it on good authority that the current run by Peter David on X-Factor is legit, and I suck for not reading it. Don’t suck like me, and check out issue #206 this week. Also, the third printing of S.H.I.E.L.D #1 is coming out this week. Fucking check it out. This isn’t the typical organization that Fury is down with. The first issue has Lenny Da Vinci, immortal cities, and a rather enjoyable pontification on the power of performative actions giving credence to ideas.

And lots and lots of blood and sexy artwork. Read it.

What are you guys picking up this week?