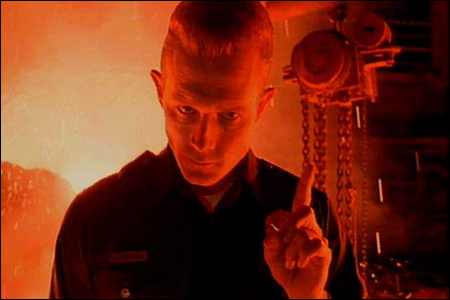 ASKING someone for help is second nature for humans, and now it could help robots overcome one of the thorniest problems in artificial intelligence.

That’s the thinking behind a project at Willow Garage, a robotics company in Palo Alto, California. Researchers there are training a robot to ask humans to identify objects it doesn’t recognise. If successful, it could be an important step in developing machines capable of operating with consistent autonomy.

Consistent autonomy? Are you out of your fraking minds? Seriously. You’d think all these tech nerds that are pushing us closer and closer to the Great Robotic Uprising of Spring of 2020 would probably watch some sci-fi. I mean c’mon, you guys are building robots. You have to be geeks. Philip Kindred Dick is considerably aggravated with all of us.

Asking questions? It’s like seventeen years before some hot blonde chick is walking up to you and asking “Are you alive?” before robotrons bomb the cities and scorch the skies. Don’t say I didn’t warn you!