Archives
« Scientists create Human Bread Yeast in a lab. What the fuck are we doing?
Vince Gilligan’s next show is being compared to ‘X-Files’ and ‘The Twilight Zone’ and fuck yes! »

‘Prey’ has Hulu’s biggest premiere ever. This makes sense cause the movie fucking rules. 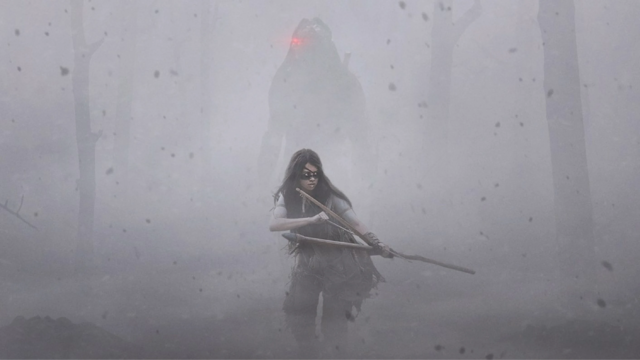 On the one hand, I fucking love seeing Prey absolutely dominate on Hulu. Biggest premiere ever! On the other hand, what a fucking travesty that this shit isn’t on the big screen. A lean, mean, gorgeous, violent, sexy beast of a movie such as this needs to be seen writ large. Upon the silver screen! Across our entire plane of vision! We were robbed.

The direct-to-Hulu release of “Prey,” the action-thriller prequel to “Predator,” notched the most viewing hours ever on the Disney-owned streamer in its first three days — among all TV series and movies.

That would mean “Prey” had a bigger aggregate viewing-time total over three days than “The Kardashians,” which Hulu in April said was its biggest TV series premiere at the time.

Disney decided to forgo a theatrical release for 20th Century Studios’ “Prey,” which premiered Aug. 5 on on Hulu in the U.S., as well as on Disney’s Star+ in Latin America and Disney+ under the Star banner in all other territories.

Disney said “Prey” also was the most-watched film premiere on Star+ in Latin America and on Disney+ under the Star banner.

However, as is often the case with streaming platforms, Hulu and Disney are not releasing the specific number of hours “Prey” was viewed. Netflix, meanwhile, does release viewing metrics and rankings for titles on its service, based on total hours streamed in a given time period.

“Prey” is set in the world of the Comanche Nation 300 years ago, centuries before the events of 1987’s original “Predator.” It follows a fierce and highly skilled warrior, Naru, who has been raised in the shadow of some of the most legendary hunters who roam the Great Plains. So when danger threatens her camp, she sets out to protect her people. The prey she stalks and ultimately confronts turns out to be a highly evolved alien predator with a technically advanced arsenal — resulting in a vicious and terrifying showdown between the two adversaries.

“As an alien-attack thriller, ‘Prey’ is competent and well-paced, though with little in the way of surprise,” Variety film critic Owen Gleiberman wrote in his review. “But the journey of Naru lends it a semblance of emotional coherence that most of the ‘Predator’ films have lacked.”