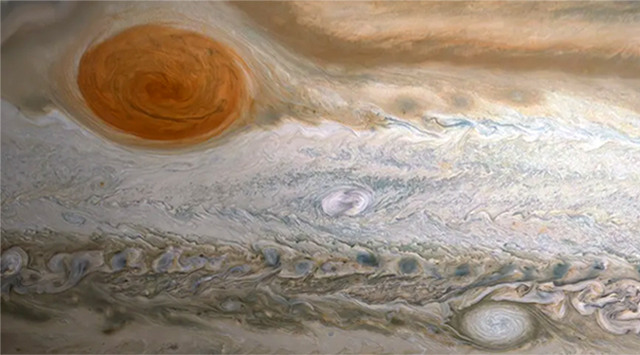 We’ve known for a long time that Jupiter’s Great Red Spot was fucking superficially huge. But, we haven’t known how fucking deep it was. Until now! Thanks to Juno, we know that motherfucker is up to 310 miles deep. Goddamn!

NASA’s Juno spacecraft is revealing the massive structure of Jupiter’s iconic Great Red Spot, a gargantuan storm that’s been raging on the gas giant for centuries. By passing over the circular storm a couple times, Juno helped scientists confirm that the spot doesn’t just exist on the upper surface but extends hundreds of miles into the planet itself.

We’ve long known just how great the Great Red Spot is. The storm’s diameter is about 10,000 miles, or more than 16,000 kilometers, wide, meaning that our planet Earth could fit completely inside the wild tempest. But scientists never fully understood how deep the Great Red Spot was. Was it just a surface-level event, or did it reach deep into Jupiter?

Now, thanks to two science instruments on Juno, planetary researchers have figured out a pretty solid range for the spot. They put the depth of the storm between 300 and 500 kilometers, or between 186 and 310 miles deep, according to research published in Science. That may seem small compared to the width of the Great Red Spot, but the depth still makes this a very formidable weather event. “That means it’s a gigantic storm,” Yohai Kaspi, a Juno co-investigator at the Weizmann Institute of Science in Israel, tells The Verge. “If you would put this storm on Earth, it would extend all the way to the space station. So it’s just a monster.”

Up until this decade, our best way of studying anything on Jupiter was to look at it from afar. Scientists could use NASA’s Hubble Space Telescope in orbit around Earth or other ground-based telescopes to study the Great Red Spot. Those instruments helped to nail down the storm’s width, but scientists could only speculate about the spot’s overall structure. “Some of them speculated that it was going to be very, very shallow, like we’re talking tens of kilometers,” Marzia Parisi, a research scientist on the Juno science team at NASA’s Jet Propulsion Laboratory, tells The Verge. “And some others, they thought, ‘Well, in theory, it could go as deep as to the core of Jupiter.’”

Then, in 2011, NASA launched its Juno spacecraft, a probe designed to get closer to Jupiter than any previous spacecraft had before. Juno spent five years traveling through deep space, and in 2016, the vehicle inserted itself into a very wide orbit around Jupiter, one that would take Juno close to the planet every 53 days. During these close passes, or “perijoves,” Juno has collected the majority of its data about Jupiter and what might be lingering inside the gas giant.

Perhaps the most exciting part of Juno’s mission is that the spacecraft was the first to pass over Jupiter’s poles — areas on the planet that had never been seen before the mission began. But in 2019, Juno did a small redirect. Scientists reoriented the spacecraft to pass over the Great Red Spot twice to get a better understanding of what’s going on underneath the storm.

During these passes, Juno measured the spot’s gravitational field in an attempt to figure out just how deep the storm goes. The Great Red Spot is so large that the Juno spacecraft can actually feel the small perturbations in gravity produced by the storm. Ultimately, the gravity signal revealed that the storm did not extend farther than 500 kilometers deep. Scientists then combined this info with previous microwave measurements taken by Juno back in 2017, which found that the storm extends at least as far as 300 kilometers deep. Those measurements put a pretty good maximum and minimum limit on the storm’s depth.

They’re the best measurements we’ve got by far of the Great Red Spot’s structure. But they also open up some questions. For one thing, the storm is deep, but not nearly as deep as some of the surrounding jet streams, which extend up to 1,800 miles, or 3,000 kilometers, into the planet. Juno also helped to pinpoint those measurements, and scientists aren’t sure why there’s a discrepancy there. “It’s surprising that it goes so deep… but it’s also surprising that it doesn’t go as deep as the jets,” Parisi says. “So something is happening at 500 kilometers that is basically dampening the Great Red Spot.”

That means there’s more still to learn about how things are churning away inside Jupiter. But thanks to Juno, scientists have a much more complete picture of the planet and its most famous storm than ever before. “Before, we just had this 2D view, just looking from the outside,” Kaspi says. “And now we have a complete three-dimensional view.”