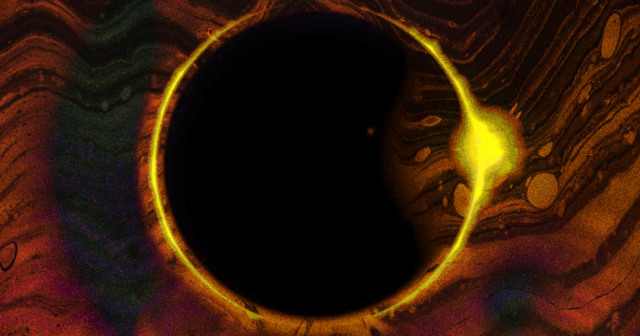 One of Earth’s nearest stars may be a fucking flat-out factory for dark matter. Like, what does that even mean? Well, it means that the giant red star Betelgeuse could be blasting out dark matter particles called axions. Pretty fucking cool, no?

Deep in its searing hot belly, the giant red star Betelgeuse could be producing tons of hypothetical dark matter particles called axions that, if they exist, would give off a telltale signal. A recent search for such a tantalizing emission has turned up empty, but helps physicists place new limits on the putative axion’s properties.

Appearing as a bright red dot in the constellation Orion, Betelgeuse is a well-studied star. It is cosmologically close, being only 520 light-years from Earth, and made headlines last year when it started mysteriously dimming, leading some researchers to believe it could be preparing to explode as a supernova.

Because it is such a large and hot star, Betelgeuse might also be a perfect place to find axions, scientists say. These conjectured particles could have perhaps a millionth or even a billionth the mass of an electron and are ideal candidates to make up dark matter, the mysterious substance vastly outweighing ordinary matter in the universe but whose nature is still largely undetermined.

As dark matter, axions shouldn’t interact much with luminous particles, but according to some theories, there is a small probability that photons, or light particles, could convert back and forth into axions in the presence of a strong magnetic field, Mengjiao Xiao, a physicist at the Massachusetts Institute of Technology (MIT) in Cambridge, told Live Science.

The thermonuclear core of a star is a good place to find copious amounts of both photons and magnetism, and Betelgeuse, which has 20 times the mass of the sun, could conceivably be “what we call an axion factory,” he said.

If axions are produced in this extreme environment, they should be able to escape outwards and stream towards Earth in large numbers. By interacting with the Milky Way galaxy’s natural magnetic field, these axions could be converted back into photons in the X-ray part of the electromagnetic spectrum, Xiao said.

As an elderly star, Betelgeuse is in a life stage where it shouldn’t be emitting much X-ray light, he added, so any such radiation detected from it might indicate the presence of axions.

Xiao and his colleagues used NASA’s space-based Nuclear Spectroscopic Telescope Array (NuSTAR) to hunt for an X-ray signature coming from Betelgeuse, though they saw nothing beyond what was expected from ordinary astrophysical processes such as the small amount of X-rays that Betegeuse is making. Their findings, which Xiao will present on April 20 at the American Physical Society’s April meeting, suggest that photons and axions are at least three times less likely to interact than previously believed.

Because stellar environments are much noisier than conditions found in a lab, doing searches such as this are tricky, said Joshua Foster, a physicist at MIT who was not involved in the work but who has been part of an effort to look for axions coming from the star clusters near our galaxy’s center. But the team worked hard to quantify their uncertainties and helped put new constraints on the axion’s potential properties, Foster told Live Science.

Even if researchers saw unexpected X-rays coming from a star, it wouldn’t necessarily indicate that axions are real. Scientists would still have to rule out many non-dark-matter explanations for the signal before turning to new physics, Foster said.

But it’s possible that axions, should they one day be found, could help astronomers better understand Betelgeuse, Xiao said. If the particles’ properties were known, telescopes trained on Betelgeuse might be able to finally pick up their signal, giving insights into processes happening in its belly and enabling researchers to calculate when it will actually explode, he added.