Archives
« Views From The Space-Ship: A (Synth)wave of relief
Report: Naughty Dog working on ‘Last of Us’ Remake while Sony’s fixation on blockbuster titles has some employees unhappy »

‘Ancient Aliens’ movie coming from ‘Cobra Kai’ showrunner and somehow I give a shit? 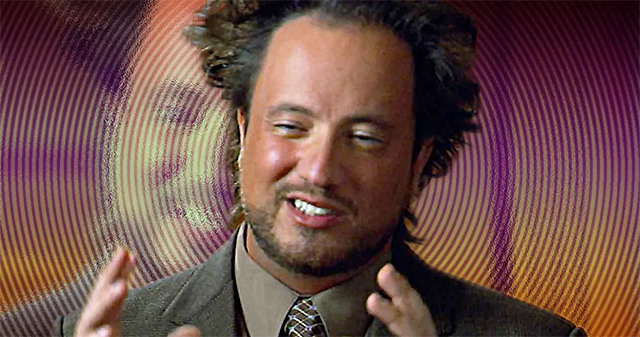 Listen. If it weren’t the Cobra Kai showrunner bringing the world an Ancient Aliens movie, I wouldn’t give a fuck. However, that dude has clearly proven he can take an unlikely commodity and make it entertaining-as-fuck. So, sure! I’ll be excited about this.

At long last, Ancient Aliens, a wildly inaccurate series that asks, “What if almost everything that happened in history was actually caused by aliens?” is becoming a movie. The movie is coming from Josh Heald, one of the showrunners of Cobra Kai, and is described as a “globe-spanning adventure featuring ancient sites and artifacts.” That makes it sound more like an Indiana Jones or National Treasure movie, which means that the only reasonable thing is to cast Harrison Ford and/or Nicolas Cage.

Ancient Aliens is fun in a campy sort of way. It’s also not-so-subtly racist in the way it posits that anything created by a non-white culture must have involved some sort of outside influence. For example: Egyptians couldn’t have built the pyramids – aliens from outer space must have done it! As Forbes points out, the series has its roots in Theosophy, a 19th-century movement that “blended hermetic magic, spiritualism, Western curiosity abut Eastern religion, colonial racism, and misconceptions of evolution into a worldview of root races, lost continents, and ascended masters who originated on Venus or other worlds.”

The series has been running since 2010 for 16 seasons on the History Channel, and is heavily influenced by the writings of total quack Erich von Däniken, the writer who made the “ancient alien” idea so popular with his book Chariots of the Gods. Both von Däniken and Ancient Aliens have a maddeningly simple philosophy: if something that happened in the past isn’t easily explained by history books, it must be the work of aliens. It’s goofy, highly implausible conspiracy theory stuff – and now it’s becoming a movie.

While the series is presented in docuseries format, it sounds like the film will be a more traditional adventure flick. Per Deadline, “the story will be a two-handed, globe-spanning adventure featuring ancient sites and artifacts, confronting the theories and questions raised by the popular docuseries.” Again: that sounds a bit National Treasure-y by way of Indiana Jones, and that’s probably the most logical approach to turning this material into a film.

Josh Heald, one of the showrunners on the popular series Cobra Kai, is set to direct the film. Heald will also produce with Jon Hurwitz and Hayden Schlossberg through their Counterbalance Entertainment banner, and with Jon Jashni. Luke Ryan will write the script and executive produce. “Helming my first feature with this same dream team who believed in me very early in my career is incredibly special. My partners and I are fired up to produce this epic story with Mary, Cale, and Luke. It’s a homecoming for me personally — and another bold step for Counterbalance Entertainment,” said Heald.