‘Chucky’ TV series has begun production and will be airing this fall. Killer fucking news! 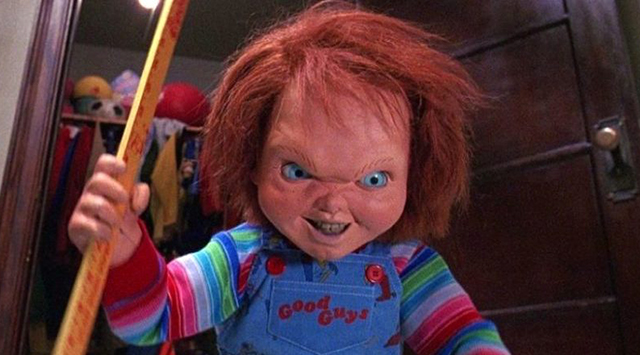 Hell goddamn yes, I’m excited for a Chucky TV series. Two reasons, fucker! First, Chucky is awesome. I learned this last Fall, when I watched the entire series, except for the reboot. Second, series creator Don Mancini is in charge.

At long last, the Chucky TV series has begun filming. The Child’s Play spin-off series was supposed to start shooting last year but COVID-19 got in the way. Now, Chucky co-creator Don Mancini has revealed that the SYFY series is finally in production – and that we’ll likely get to see it this fall. The series follows a suburban town plunged into chaos when a Good Guy doll turns up at a yard sale. Devon Sawa is part of the cast, as is original Chucky voice actor Brad Dourif. And on the heels production kicking off, Arrow‘s Lexa Doig has joined the cast as well.Don Mancini broke the news that the Chucky TV series production had begun, stating on social media that “the series is officially in production and coming to USA Network and SYFY this fall.”

A continuation of the Child’s Play series, Chucky kicks off when a “vintage Chucky doll turns up at a suburban yard sale.” The result: “An idyllic American town is thrown into chaos as a series of horrifying murders begin to expose the town’s hypocrisies and secrets. Meanwhile, the arrival of enemies — and allies — from Chucky’s past threatens to expose the truth behind the killings, as well as the demon doll’s untold origins as a seemingly ordinary child who somehow became this notorious monster.”

In addition to Sawa, the series brings back Brad Dourif as the voice of Chucky. Dourif’s daughter Fiona Dourif, who appeared in the previous two Chucky movies, is on board as well, as is franchise player Jennifer Tilly. New additions to the franchise include Zackary Arthur (Transparent), Teo Briones (Ratched), Bjorgvin Arnarson (PEN15), and Alyvia Alyn Lind (The Young and the Restless). And SYFY reports that Lexa Doig has joined the cast as well, playing Bree Webber. She’s married to Logan (played by Sawa), and the aunt of Jake Webber (Arthur). She’s also “held to an unrealistic standard — by her husband and herself, which leads her to keep a dark secret from her family.”

Chucky is firmly rooted within the main Child’s Play/Chucky franchise, which is still going strong. In 2019 there was a Child’s Play reboot, but that film is completely unconnected from the primary series. Don Mancini, the co-creator of the franchise, has remained a constant presence throughout the entire series, and he’s on board to write and direct episodes of the TV series as well.