Archives
« Quentin Tarantino writing ‘Once Upon A Time In Hollywood’ novel as part of two-book deal. Okay then!
Streaming some motherfucking ‘Hades’ tonight, baby! »

David Fincher said he would “love to revisit” fucking ‘Mindhunter’ at some point. Bro, don’t tease us! 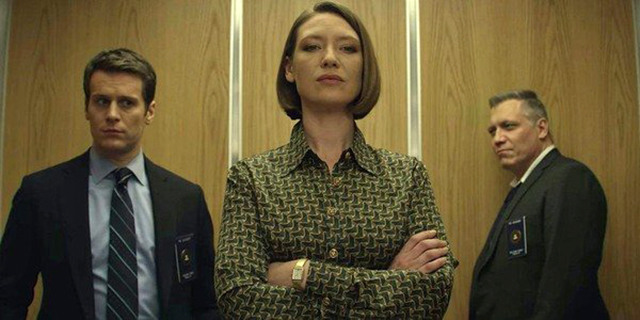 Mindhunter is dead. Unless it isn’t. You see, it’s dead now, but it may not be dead later. This is according to David Fincher, who said he’d love to revisit the series. Dude also said he envisioned the series taking place up until the 2000s, and ending with the BTK Killer. Fuck me, I need this.

David Fincher revealed to Vulture in an interview in late October that his serial killer series “Mindhunter” was most likely finished at Netflix due to the series’ costly budget and low viewership, but the director is still keeping a door open for a potential return. Speaking to Variety ahead of the upcoming streaming release of “Mank,” Fincher said, “At some point I’d love to revisit it. The hope was to get all the way up to the late 90’s, early 2000’s, hopefully get all the way up to people knocking on the door at Dennis Rader’s house.”

Dennis Rader became infamous as the BTK Killer. He killed 10 people in Wichita and Park City, Kansas, between 1974 and 1991. The BTK Killer taunted the police by sending them letters detailing his crimes in gruesome details. Rader was eventually arrested for his crimes in 2005 after he resumed sending letters to the police a year earlier. “Mindhunter” fans are well aware how important the BTK Killer was to “Mindhunter’s” endgame, as Fincher and his team threaded out Rader’s introduction to the show throughout the first and second seasons.

While Fincher expressed hope in returning to “Mindhunter” one day, he also doubled down on the fact the series is dead for now and not developing any new episodes. As the filmmaker said, “I don’t know if it makes sense to continue. It was an expensive show. It had a very passionate audience, but we never got the numbers that justified the cost.”

Fincher added, “I certainly needed some time away. We had all hands on deck to finish [season two] and we didn’t have a ton of scripts and a ton of outlines and a bible standing by for season three. I’ll admit I was a little bit like ‘I don’t know that I’m ready to spend another two years in the crawl space.’”

In his interview with Vulture, Fincher said how “Mindhunter” forced him to spend six to seven months a year for over three years in Pittsburgh in order to work on the series. “We had done the first season of ‘Mindhunter’ without a showrunner, with me pinch-hitting on a week-by-week basis,” the director said. “We started getting scripts for the second season, and I ended up looking at what was written and deciding I didn’t like any of it. So we tossed it and started over.”

Head over to Variety’s website to read Fincher’s latest thoughts on the future of “Mindhunter” in their entirety.