Dwarf Planet Ceres has a secret saltwater ocean underground. Yo, how fucking rad is this?!? 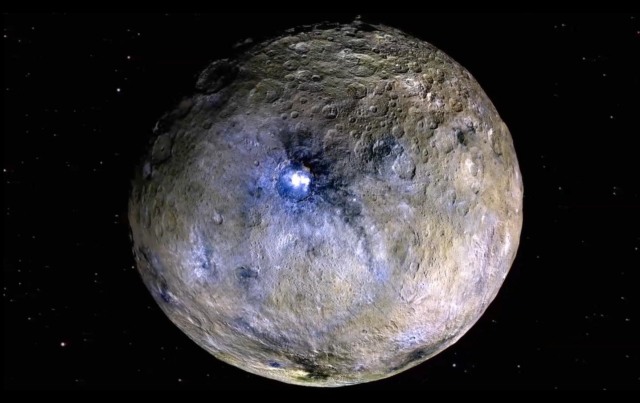 Cosmos! Tell me your secrets! I demand it. Oh, you got one? About Dwarf Planet Ceres? Well, do fucking tell! Oh, oh fuck! It has a secret saltwater ocean underground? Holy shit, this is rad.

Scientists are attributing the mysterious bright spots on Ceres, the largest object in the main asteroid belt, to a gigantic reservoir of salty water beneath the dwarf planet’s crust.

Subsurface oceans are the kind of thing we expect to see in the outer solar system, specifically on the icy moons in orbit around Jupiter, Saturn, Uranus and Neptune. But according to seven (yes, seven) new papers published to a special Nature collection, subsurface oceans can also appear on objects without a host planet, as showcased by Ceres, a dwarf planet in the main asteroid belt between Mars and Jupiter.

Ceres, as the new research shows, was recently active and may still be, containing a vast reservoir of groundwater and exhibiting a form of cryovolcanism (in which groundwater reaches the surface) not seen before in a celestial object. Subsurface oceans on icy moons, like Jupiter’s Europa and Saturn’s Enceladus, are kept warm by tidal interactions exerted by their host planets, but the same cannot be said for planet-less objects in the asteroid belt. On Ceres, this phenomenon is more a matter of chemistry, as the subsurface water remains in a slushy state due to its high salt content.

The new research, described in papers published in Nature Astronomy, Nature Geoscience, and Nature Communications, included scientists from NASA, the Lunar and Planetary Institute (LPI), the University of Münster in Germany, the National Institute of Science Education and Research (NISER) in India, among many other institutions.

At 590 miles wide (950 kilometers), Ceres is the largest object in the asteroid belt. NASA’s Dawn spacecraft visited Ceres from 2015 to 2018, collecting critically important data during the final five months of the mission, when the orbiter swooped to within 22 miles (35 km) of the surface.

High-resolution images sent back to Earth revealed Occator Crater in unprecedented detail. This crater, formed by a giant impact, is the dwarf planet’s most distinguishing feature, measuring 57 miles wide (92 km), which is pretty huge even by Earth standards. Occator Crater was revealed as a complex structure, featuring a central depression covered in a dome-like structure, various cracks and furrows, and bright mineral deposits and smaller domes scattered throughout.

That water may have been responsible for Ceres’s bright surface features was suspected prior to the Dawn mission, but data gathered by the orbiter suggests this is very much the case.

A common feature of impact craters is a peak that forms in the center. Such a feature formed inside Occator, but it collapsed, creating a depression within the depression. Then, around 7.5 million years ago, water—or more of a brine—rose up to the surface, leaking through this collapsed peak. This salty water evaporated, leaving reflective deposits behind in the form of sodium carbonate—a mixture of sodium, carbon, and oxygen. The bright white splotch at the center of Occator, Cerealia Facula, is the remnant of this process.

Similar deposits appear elsewhere within the crater, including a prominent feature called Vinalia Faculae. At these locations, the brine rose to the surface via cracks and furrows.

Around 2 million years ago, Cerealia Facula became active again, spewing out more brine, forming a central dome of bright material. These processes were ongoing as of around 1 million years ago, and they’re possibly still happening today, though the cryovolcanic processes have weakened considerably over time.

Evaporation and sublimation (when liquid transforms directly into a gas) forced the water to the surface, in a form cryovolcanism not seen anywhere else in the solar system, according to the researchers. Scientists have good reason to believe this process may exist elsewhere on other seemingly inert bodies.

“The evidence for very recent geological activity on Ceres contradicts the general belief that small solar system bodies are not geologically active,” said Guneshwar Thangjam, co-author of the Nature Astronomy paper and a researcher from NISER, in a press release.

Importantly, the subsurface ocean likely formed as a result of the impact event that created Occator Crater, but its ongoing slushiness is due to dissolved salt in the groundwater.

“For the large deposit at Cerealia Facula, the bulk of the salts were supplied from a slushy area just beneath the surface that was melted by the heat of the impact that formed the crater about 20 million years ago,” Carol Raymond, first author of the Nature Astronomy study and Dawn principal investigator, said in a NASA press release. “The impact heat subsided after a few million years; however, the impact also created large fractures that could reach the deep, long-lived reservoir, allowing brine to continue percolating to the surface.”

Ceres features hundreds and possibly thousands of smaller deposit sites, most of which are less than 33 feet (10 meters) thick. Domes and pits appear on the surface, also forming from groundwater movement.

By studying the gravity of Ceres, scientists were able to infer its internal structure. The salty reservoir lies some 25 miles (40 km) below the surface and is hundreds of miles wide. Given that Ceres itself is just 590 miles wide, it’s fair to call Ceres an ocean world.

Seemingly overnight, Ceres has become a tantalizing target for astrobiologists. With its complex chemistry, liquid water, and ongoing surface and subsurface dynamics, it may have been habitable at some point during its recent history. A mission to send a probe to the surface suddenly seems like a very good idea.