Archives
« Michael Keaton returning as Batman in ‘The Flash’ movie, maybe more. This is so fucking good.
CERN has approved the plans for a $23 billion, 62-mile long super-collider. Study that Higgs boson, fellas! » 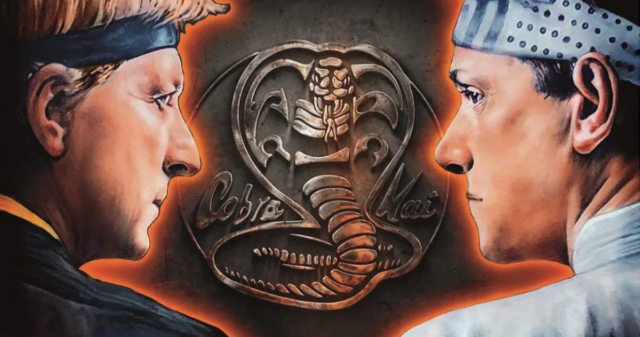 Everyone! Everyone I’ve fucking spoken to has said Cobra Kai is awesome. So man, I need to stop fucking around and start watching it. Especially now that it’s heading to Netflix.

For two seasons, the Karate Kid sequel series Cobra Kai has been streaming on YouTube. The series was the highest profile YouTube Premium project, but with the online video site pulling back spending on original scripted programming, it has been looking for a new home. Now, it has officially found one at Netflix, which will debut the third season.

A press release announced the arrival of Cobra Kai on Netflix, continuing the next iteration of the Karate Kid franchise, which follows Ralph Macchio and William Zabka reprising their roles as rivals Daniel LaRusso and Johnny Lawrence, who they started playing back in 1984. Under the new deal at Netflix, Cobra Kai will premiere the show’s third season exclusively on the streaming service, but not until after the first two seasons arrive in their library sometime later this year.

If you never got a chance to give Cobra Kai a shot, the series takes place 30 years after the events of The Karate Kid and switches of the dynamic between Daniel LaRusso and Johnny Lawrence. LaRusso is now the successful owner of a car dealership who has used his fame as a karate champion as a bit of a gimmick, but he still believes strongly in the teachings of his mentor, the late Mr. Miyagi, which he has instilled in his teenage daughter. Meanwhile, Lawrence is down on his luck with a son who despises him. So he aims at redemption by reopning the Cobra Kai karate dojo where he previously studied martial arts.

Cobra Kai is one of the more successful attempts to revive a nostalgic franchise, and it takes the Karate Kid characters, as well as the new roster of characters, in some interesting directions. There’s a real love for the original franchise in the series, and it has plenty of references to previous events in the movies, but it still branches out enough to stand on its own.

The series is written and executive produced by Josh Heald, Jon Hurwitz, and Hayden Schlossberg through their production banner Counterbalance Entertainment. It’s kind of amazing that the filmmakers behind the likes of Hot Tub Time Machine, Harold & Kumar Go to White Castle, and the American Pie sequel American Reunion were able to turn Cobra Kai into such a satisfying sequel series. The trio said in a statement:

“Making Cobra Kai has been a dream come true for us since day one. We are thankful for the tireless dedication of Jeff Frost, Chris Parnell, Jason Clodfelter, Karen Tatevosian, and all our partners at Sony for finding us a new home where we can not only continue the series, but also explore opportunities to further expand The Karate Kid universe. We are beyond excited to join our new partners at Netflix and look forward to the show reaching the massive global audience who loves this franchise as much as we do.”

Hopefully, Netflix will give the creators enough time to tell the story they want to tell without cutting it off too soon. Brian Wright, Vice President of Original Series at Netflix, said in a statement:

“The appeal of The Karate Kid saga is timeless, and Cobra Kai picks up right where it left off without missing a beat. The rivalry between Daniel and Johnny is one for the ages, and the show has a ton of heart and is a lot of fun. We can’t wait to introduce a new generation of fans to Cobra Kai and are thrilled to be its new home around the world.”