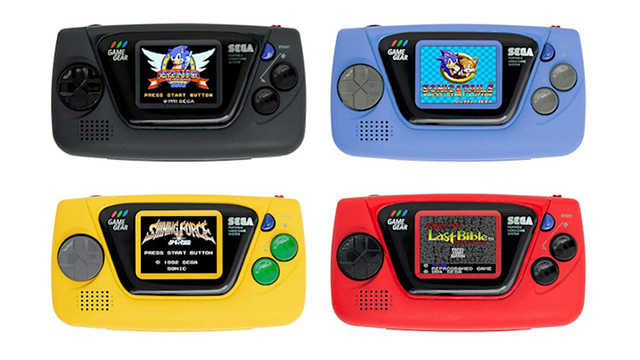 Sega! The fuck you up to, dudes? The Game Gear Micro? A handheld that’s screen is only 1.15-inches? Uh, okay!

So what’s the next step after mini retro consoles? Apparently, Micro. For its 60th anniversary, Sega just unveiled this teeny tiny portable gaming machine, the Game Gear Micro. For reasons unknown to me, Sega has taken this shrunken down system to a size we’ve rarely seen before, capable of running on power from two AAA batteries or a USB connection. It’s available in four colors, and each color has a different lineup of Game Gear games built-in.

Last year’s Genesis Mini was a surprisingly well-considered package that did more than just cash-in on the retro craze, so maybe Sega is on to something here too. I just don’t know what that something is.

If you don’t want to choose between different variants of Sonic, Shining Force, Gunstar Heroes or OutRun, then the solution is to buy all four, which I’d recommend because that package also includes a Big Window Micro lens that mounts on the console to make its 240×180 1.15-inch screen more usable. It has a mono speaker, headphone jack and, like the Genesis Mini, it can provide save states for your games that go beyond what was possible back in the 90s.

The four-console pack is priced at 21,912 yen, or about $201 and will go on sale October 6th via Amazon Japan, Rakuten or Sega’s official online shop. If you get it from Sega, a collector’s edition pack adds a fifth shell option, an appropriately retro “Smoke” clear plastic frame, while the other retailers have bonuses including collectible pins or special t-shirts.