Archives
« ‘Tony Hawk Pro Skater 1 and 2’ Remaster confirmed to have *most* songs, for what it’s worth, dudes!
Weekend Open Bar: Baby, can you dig your man? » 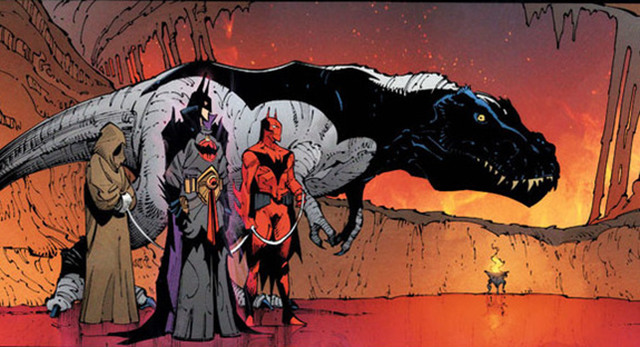 Warren Ellis is my favorite goddamn comic book writer of all time. Granted, I haven’t followed him as closely the past couple of years. But, that’s more about my failing to read any comics. That said? Ellis writing a T-Rex Batman may be just the juice needed to power my ass back into a funny book shop.

The guidebook will “showcase the new factions of Earth and explore the mystery of what happened to the Justice League after their battle with Perpetua,” while the Legends title will be “collection of short tales where demons dwell and reality is overrun by monstrous versions of the Dark Knight.”

Including T-Rex Batman, as written by Warren Ellis.

Ellis confirmed the news on his blog: