Archives
« Sony has announced PlayStation Studios brand for its first-party PS5 titles. I can dig it!
‘Tony Hawk Pro Skater 1 and 2’ HD Remaster dropping this September. Warehouse, here we come! »

Dude creates computer that only runs ‘Doom’ because ripping-and-tearing must be universal! 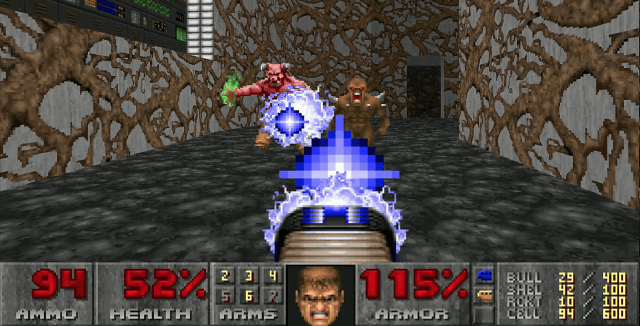 Doom has been pretty much ported to everything at this point. No, really. Like ATMs, and McDonald’s kiosks and shit. The latest Doom iteration? A computer chip that only plays the title.

Doom runs on everything. Billboard trucks, digital cameras, and even McDonald’s cash registers have been tweaked to run the 1993 first person shooter. But a developer named Sylvain Lefebvre has taken Doom to the next level and programmed a computer chip to have only one exclusive task—it runs Doom.

As Engadget first reported, Lefebvre coded the game on to a Cyclone V FPGA circuit board—think a more expensive and powerful Raspberry Pi. The bulk of the code, the renderer, is 666 lines of code. The chip doesn’t play Doom so much as it runs a camera through a custom port of the first level, rendering it as it goes. This is all the chip does, and will continue to do as long as it’s operational.

“Algorithm is burned into wires, [look-up-tables] and flip-flops on [the chip,]” Lefebvre said. “Doom was released as I was learning how to code graphics. It was, and remains, an immense inspiration and motivation boost. I spent countless hours making levels, hacking the game and hex dumps of doom.exe / doom.wad. This was a good opportunity to dive back into it!”

The DooM-chip! It will run E1M1 till the end of times (or till power runs out, whichever comes first).
Algorithm is burned into wires, LUTs and flip-flops on an #FPGA: no CPU, no opcodes, no instruction counter.
Running on Altera CycloneV + SDRAM. (1/n) pic.twitter.com/wd7j4JnfWn