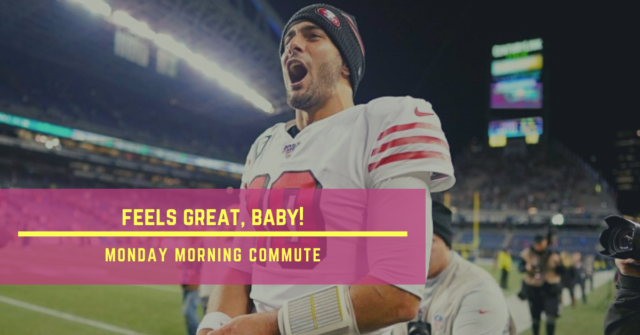 Feels great, baby! Being back to school. Like, no, really. For the moment, it does. The break was needed, but a little forward momentum is nice. At a certain point, relaxing just sort of feels normal. There ain’t the pang of appreciation anymore when you sit down to watch a movie. Or hang out with a friend. So, fuck yeah! I’m back in motion, for fifteen weeks. Dusted off the brain-piece, and have officially begun rambling, swearing, and sweating in front of students.

However, as I said, this means I actually have things to look forward to enjoying.

What are said things? I’m glad you asked! I’ll tell you down below, as well as what I’ve been digging on since we last spoke.

Grooving to “The Night You Murdered Love” by ABC.

Somehow, this was never used in a 1980s montage. This is fucking flat-out unacceptable, folks. But, once the Bitcoin Billionaire officially cashes in, I look forward to producing a movie featuring it. Maybe an assassin getting ready to get revenge upon a femme fatale who betrayed him? That works for me.

Listen, okay. I fucking blew it last Saturday during our first 1BC run. In my defense? There was pandemonium in Bateman’s apartment. Pandemonium in chat. And, I was vaguely aware that we could only stream for like, three more minutes. I will have my revenge this fucking weekend.

Fine, I’ll admit I’m watching the first season of You.

I initially checked out You because the second season seemed to grip the slop-masses by storm this holiday. And I’ll level with you, I feel equal parts shame and enjoyment when considering the show. The dude is Dennis Reynolds by way of some Dexter, and I’m here for it. I wouldn’t call it good, but any show that swings at bougie hipsters, MFA students, and the general gloss of our world gets my snickering.

Appreciating the fuck out of the movie Branded To Kill.

A self-aware 1960s Japanese yakuza flick! Had it recommended to me by an Internet Entity, and I’m glad I bit.  It’s equal parts surreal, hilarious, and, well, violent as fuck. As well, it introduced me to director Seijun Suzuki. In fact, I’m looking forward to checking out more of his oeuvre.

Wondering if anyone has checked out The Gentleman.

Fuck yeah, I’m down for quality Guy Ritchie slop! From what I’ve read, the movie is a return to form for the dude. So, I ask all you folks. Have any of you seen it? I’m definitely interested in it.

Okay, fair enough — I’m enjoying this Super Bowl a bit more than if it were two completely anonymous teams. You see, pretty much all of New England has adopted the 49ers as their second team, after the Patriots traded the Heir Apparent to them. That said, I actually really like the Chiefs as well. You gotta be dead inside to not appreciate Mahomes and that offense. Here’s hoping for a high-scoring slobberknocker.

Existing within the capitalist ruins of The Outer Worlds is so damn enjoyable.

The Outer Worlds is a comfortable anxiety blanket for anyone who enjoys the Fallout series, and has become deillusioned with Bethesda. It’s not really doing anything new, for fans of the aforementioned series. However, it’s doing everything Fallout very well. Plus, it takes place in fucking space! And with the collapse of BioWare, I’ll take my space RPGs where I can.

That’s it for me, Comrades-In-Trash! What are you looking forward to this week? What are you enjoying? Let me know!

Tags: abc - the night you murdered love, branded to kill, dead cells, the gentleman, the outer worlds, the super bowl, you the show