STAR WARS is the JORDAN of Film Franchises 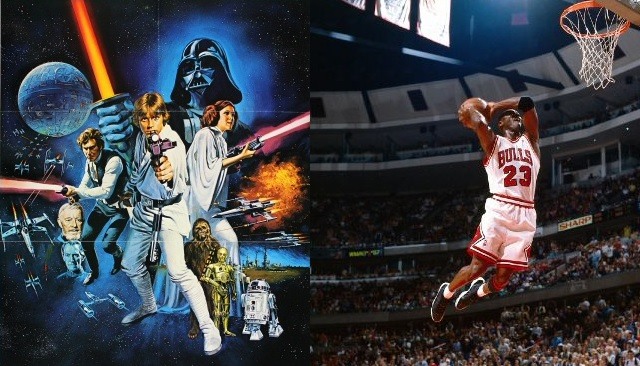 STAR WARS is the Michael Jordan of film franchises.

There is an argument to be made that Michael Jordan is the greatest basketball player of all time.

At the University of North Carolina, Jordan won a championship his freshman year. After three seasons at UNC, Jordan was drafted by Chicago Bulls, where he’d ultimately win six championships. The superlatives amassed during his NBA tenure are as overwhelming as a tax account’s April “To-Do List,” with “Rookie of the Year” and “5-Time MVP” and “6-Time NBA Finals MVP” and “14-Time All-Star” beaming from the litany.

Outside of the NBA, Jordan seemed to make waves with everything he did –  hosting SNL, teaming up with Nike, lending a hand to the Tune Squad, and, y’know, leading the 1992 Dream Team to Olympic gold. With such bona fides on MJ’s resume, it’s hard to argue against the fact that his contributions to basketball transcended the court – he had made real, palpable impressions on American (and, really, global) culture.

So when he retired after hitting the winning shot in game six of the 1998 NBA Finals, Michael Jordan walked away from basketball having secured a legacy that can only be described as pristine.

Only, he didn’t walk away. And his legacy is far from untarnished. And this is why STAR WARS is the Jordan of film franchises.

Like Michael Jordan for the basketball world, STAR WARS is seen as the exemplar for film franchises – it’s a storied property beloved by casual fans and devotees alike, it’s a cultural totem whose characters and settings and ideas are used as shorthand referents in everyday life, it’s an ostensibly unachievable aspiration for creators. To not know at least something about STAR WARS is, in fact, unusual, and this is a testament to the legitimate impact that it’s had on society.

If you tell a high school basketball player that they looked like Jordan during their last game, they’re going to be absolutely amped by the compliment. Tell a high school gamer that you’ve just started playing Fallen Order, and they’ll see this as a cue to talk your ear off about the adventures of Cal Kestis. Now, given that we’re approaching the end of 2019, think about how neither of those kids was alive when the meteors of Michael Jordan and STAR WARS first burned their way through the atmosphere.

So, what’s the deal?

Well, sometimes meteors crash into the terra firma with enough force for there to be some far-reaching consequences – just ask the dinosaurs. STAR WARS, like Michael Jordan, surfs on shock waves that were drummed up decades ago and are capable, somehow, of cresting over any impediments that’d surely give the `ole Moses at the Red Sea treatment to most pop culture entities.

For those celebrating these legacies it’s an absolute strength.

But for some – call us malcontents or cynics or maybe just disappointed optimists – it’s a bit more complicated. When I say “STAR WARS is the Michael Jordan of film franchises,” it’s not exactly laudatory. Nor is it completely pejorative. It’s an attempt to express an appreciation for a greatness once achieved while still acknowledging that a legacy can be secured despite some serious missteps.

Let’s start at the end – Jordan and STAR WARS both tacked unnecessary codas onto what might’ve otherwise been seen as perfect finales.

That game winning shot of the `98 NBA Finals? It would’ve been the perfect capstone for Jordan, had he actually walked away from basketball. Instead, he only stayed off the court for three seasons before returning to rock a two-season stint with the Washington Wizards.  Today, discussions of Jordan’s legacy seem to either completely omit his tenure as a Wizard or decry it as an abysmal failure, but the truth is that Jordan’s return was a mixed bag.

Christopher Pierznik’s “Michael Jordan’s Performance as a Wizard Was Far Better Than You Remember” challenges the pervading narratives by outlining the triumphs His Airness achieved as a Wizard. Pierznik heaps praise upon these final two seasons by detailing Jordan’s successes – his becoming the oldest player in league history to score 50 or more points in a game, his appearance in two additional All-Star Games, and his ability to help the Wizards become playoff contenders after the franchise’s worst season (amongst others). If you’re so inclined, go onto YouTube and search for some Jordan/Wizards highlights, and you’ll find plenty of material to enjoy.

That said, age and injuries are the most formidable of foes, and there’s no denying that these two seasons are the weakest of Jordan’s entire career. And as such, it can be easy to be a bit bummed out to think about how the dude known for flying towards the basket didn’t stick the landing.

This sense of having devoured a delicious meal only to be presented with a half-baked dessert is now being felt by STAR WARS fans, as this weekend sees the release of The Rise of Skywalker. This final installment of the Disney-produced sequel trilogy is being panned by critics and is providing more kindling for the ever-raging fire that is fan frustration. While some criticized the plot of The Force Awakens for being a rehash of A New Hope, it was largely celebrated; The Last Jedi was a critically-approved second act that divided the fanbase; and now Episode IX is probably going to make a zillion dollars, but there’s an undeniable dissatisfaction with the “throw spaghetti at the wall and see what sticks” approach that seems to have been used.

The Rise of Skywalker is a relentless two-and-a-half-hours of fan service that tries to provide everyone with everything. It attempts to cater to fans of the original trilogy, it wants to appease prequel-memers and Lucas apologists, it wants to win back the hearts of those discontent with Rian Johnson’s subversive eight installment, and it wants to give a satisfying conclusion to those who’ve unquestioningly gone along for the ride. In the process, JJ Abrams and crew pull out all the stops, shake every ace out of their sleeves, and use every version of “The Annexation of Puerto Rico” at their disposal.

In short – the entire movie is a deus ex machina. And the problem is that you can only convince people that you’ve produced God from a machine if they weren’t already leaning towards becoming agnostics or full-blown atheists.

In other words, The STAR WARS sequel trilogy is the franchise equivalent of Michael Jordan’s career as a Washington Wizard.

Now, to be fair, this also implies that there are some proverbial gems in the rough to be found. While universal consensus is hard, or maybe impossible, to attain, it’s an uphill battle to suggest that there’s nothing enjoyable about the last three movies of the Skywalker Saga. If you’re a STAR WARS fan, there’s probably something that you enjoyed about these three films. Maybe you really like the story, but hate the execution. Maybe you love The Force Awakens but have to bow out after that. Maybe you tip your cap to a couple of moments from each of these movies, even if you didn’t enjoy any of them overall. Hell, maybe you just thought it was cool to see lightsabers on the big screen again, even if the end result wasn’t anything that came close to rivaling that Luke/Vader duel on Bespin.

Just like maybe, just maybe, it was cool to see Jordan lace up his Nikes, throw on a jersey, and go hard in the paint – even though it didn’t get him another NBA Championship.

Moreover, it’s important to remember that Jordan wasn’t perfect before tossed on a Wizards jersey, and STAR WARS wasn’t a perfect franchise before the Disney acquisition. These perspectives are the products of rose-tinted glasses looking at Photoshopped versions of our most nostalgic memories.

Oh, it’s tempting to tell ourselves that the Washington years are the lone zit on the face of Venus, just as it’s comforting to think that until the sequel trilogy there were no scars on the cheek of Aphrodite. But Jordan and STAR WARS, although excellent, lost their unmarred visages long before these moments.

Before the Wizards run there were two previous retirements and the attempt at playing minor league baseball and the red flags about gambling and the rumors that the murder of MJ’s dad was connected to debts incurred from said gambling and the womanizing and the fact that Jordan never won a championship without Phil Jackson (but Jackson won five more without him) and, hell, it’s no secret that Chaos in the Windy City is a real dud.

In that galaxy far, far away, there were plenty of issues before the declarations of “The Force Awakens is a lame remake” and “Rian Johnson ruined my childhood” and “The Rise of Skywalker is a fan service mess” were ever even considered. Like what, you ask?

Well, if you grew up with the prequels you might’ve thought that it was lame that Lucas planned on re-releasing the first six movies in 3D but abandoned the plan after Episode I. Or, if you grew up with special editions of the original trilogy, maybe you thought it was bogus that the 2004 DVD releases included additional changes. Or, if you grew up with original trilogy, maybe you thought that the special editions bastardized movies that were already the closest thing to a perfect triumvirate of sci-fi/fantasy wonder. Or, if you were around for the release of The Empire Strikes Back – one of the greatest sequels in movie history and a genuine cinematic masterpiece – you might’ve been pretty bummed out to see that The Return of the Jedi included a third act centered around teddy bears.

Or, hell, it’s the perfect time of year to mention this – if you saw the original STAR WARS in the theaters, you must’ve somewhere between bewildered and livid that the second time you got to hang out with these characters was a cocaine-addled holiday special.

Minutiae aside, the point is that STAR WARS was not some sacred property before Disney produced the sequel trilogy, just as Michael Jordan was not some sort of sanctifiable, slam-dunking savior before he joined the Wizards. Both changed their respective games, inspired others to aspire for greatness, and kept trying to produce what they could, even if the quality undeniably diminished over the years.

STAR WARS is the Michael Jordan of film franchises – flawed in ways many overlook, successful in ways many don’t recognize, undoubtedly past its prime, but still capable of inspiring spirited debate.