Archives
« New machine on the International Space Station is going to turn trash into “ink” for 3D Printer aboard the station. The future fucking rules, dudes.
Domino’s Japan has a “Halloween Roulette” pizza with ghost pepper sauce in one random slice. Chaos, fucking chaos, I love it. »

‘Adventure Time’ is getting four new specials on HBO Max. Which reminds me, I gotta return to the series! 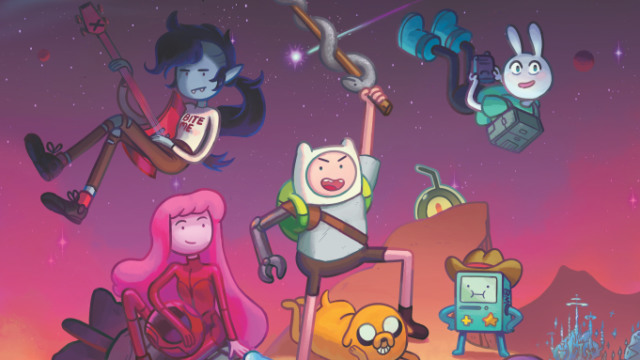 Adventure Time. I fucking love what I’ve seen of it. But, I ain’t seen it all. And now, there’s even more of the series coming to clog my backlog. Specifically, four new specials!

As Adventure Time taught us over and over, the fun (and adventure) will never end. A year after the acclaimed Cartoon Network series went off the air, HBO Max is bringing back the animated fantasy-adventure for four new specials. The Adventure Time HBO Max specials will be an hour long each, and will not only bring back everyone’s favorite talking dog and human but give the spotlight to a slew of the Land of Ooo’s most colorful denizens.

Cartoon Network Studios will be producing the four hour-long Adventure Time specials, titled Adventure Time: Distant Lands, which are set to premiere exclusively on HBO Max in 2020. The first two specials set to air in 2020 are BMO, which follows the lovable air-headed robot on a “deadly space emergency,” and Obsidian, a Marceline and Princess Bubblegum-centric story that will be sure to send the Bubbline shippers in a tizzy. Wizard City and Together Again will follow at undisclosed dates.

Here are the synopsis for the four specials:

BMO follows the lovable little robot from Adventure Time. When there’s a deadly space emergency in the farthest reaches of the galaxy, there’s only one hero to call, and it’s probably not BMO. Except that this time it is!

Obsidian features Marceline & Princess Bubblegum as they journey to the imposing, beautiful Glass Kingdom—and deep into their tumultuous past—to prevent an earthshaking catastrophe.

Wizard City follows Peppermint Butler, starting over at the beginning, as just another inexperienced Wizard School student. When mysterious events at the campus cast suspicion on Pep, and his checkered past, can he master the mystic arts in time to prove his innocence?

Together Again brings Finn and Jake together again, to rediscover their brotherly bond and embark on the most important adventure of their lives.

With Cartoon Network producing the specials, I presume some of the original creative team will be on board — which is tantamount to these Adventure Time specials being a success. A weird, gonzo, wildly imaginative animated series that didn’t balk at experimenting with animation styles or non-chronological storytelling even if it was cracking a bunch of fart jokes the episode before, Adventure Time was truly an a masterwork among animated cable shows.