Archives
« Japanese scientists have created artificial blood that could be used on any patient. Gimme a hell yeah for science!
Times Square gets ‘They Live’ Trump billboard thanks to crowdfunding. Well done, public. »

‘Red Dead Redemption 2’ coming to PC on November 5! ‘Yeehaw Skyrim’ for all! 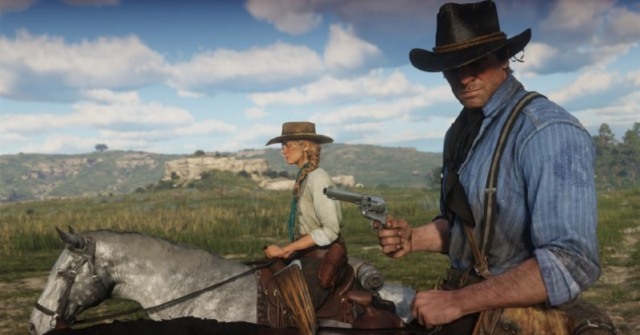 Red Dead Redemption 2 is coming to PC! Man, I really, really enjoyed the title. In fact, I spent hundreds of hours in it. That said, I don’t blame anyone who found it boring, or plodding. Now after a year, a whole new crop of gamers are either going to lose their lives as they’re sucked into the world, or lose their mind at its slow-ass nature and asstacular controls.

The long-anticipated PC release of Red Dead Redemption 2 is coming very soon. Today, Rockstar announced that its Wild West epic will be launching on PC on November 5th. As expected, the new platform will mean graphical and technical improvements, and Rockstar also says that there will be “new bounty hunting missions, gang hideouts, weapons, and more.” The PC release will also include the multiplayer add-on Red Dead Online.

Actually purchasing a copy will be a little convoluted, however. Starting October 9th, the game will be available for preorder through the newly launched Rockstar Games Launcher, and those who preorder before October 22nd will receive some bonuses in the form of two free classic Rockstar games, including GTA III, Vice City, and Max Payne 3.

At launch, the game will also be available via the Epic Games Store, Greenman Gaming, the Humble Store, GameStop, and “additional digital retailers” with preorders starting on October 23rd. Steam, meanwhile, will be coming on later: RDR2 will launch through Valve’s store in December. The game will also be a launch title on the Google Stadia streaming platform in November.