Archives
« Warren Ellis and Bryan Hitch are reteaming for ‘Batman’s Grave’ and I really need to get back into comics
‘Top Gun: Maverick’ Trailer: Feel The Need, The Need For Speed, Again! » 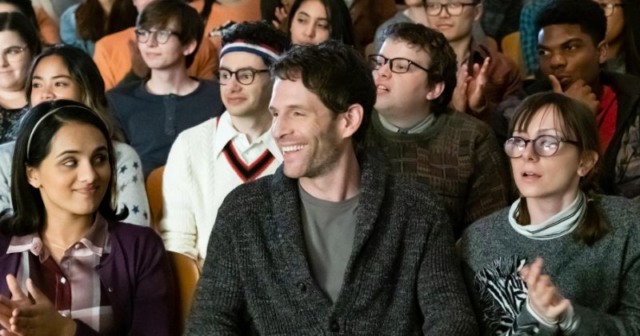 A.P. Bio is not canceled! It’s been saved…by the same station that killed it. Goddamn, I love A.P. Bio. How fucking much? I’m willing to adopt NBC’s streaming platform to watch the show. That’s how much.

NBC’s currently unnamed streaming service has its first scripted comedy — and it’s a familiar one.

Lorne Michaels-produced single-camera comedy A.P. Bio has been revived for a third season as the streaming platform’s first half-hour original. The news comes more than a month after NBC canceled the comedy about a disgraced philosophy professor-turned-high school comedy after a two-season run. Glenn Howerton and Patton Oswalt star in the comedy from exec producers Michaels, Seth Meyers and showrunner Mike O’Brien.

“I’m so overwhelmed by the outpouring of support from the fans,” O’Brien said. “The cast and I are thrilled that we get to make more and I’m excited to work with the NBCU streaming platform.”

Sources say execs within the NBCU fold — the series also is produced in-house via Michaels’ Universal Television-based Broadway Video banner — were high on the comedy and the cast was also eager to return to the series. Universal TV will now have to ink the stars to new deals after their options all expired in June. O’Brien, who has a long-standing relationship with Michaels dating back to his time on SNL, bemoaned the cancellation in a pair of heartfelt tweets in late May in which he said A.P. Bio was his “favorite project” of his life and that the show was just hitting its stride.

Still, the midseason entry was never a ratings breakout for the broadcast network. Season two tumbled 27 percent and averaged a 0.7 in the advertiser-coveted adults 18-49 demographic and a mere 884,000 total viewers. The surprise pickup arrives as NBCU execs look to capitalize on the show’s strong digital performance. The pilot of the comedy, which originally aired in February 2018 to a 0.8 in the demo, now sits at a 5.6 after 100 days of delayed viewing. The series is also strong digitally with the 18-34 demo. Season one of the series was NBC’s most digital-skewing show of the 2017-18 season, with 35 percent of its 18-49 audience coming from digital platforms. In season two, A.P. Bio generated 47 percent of its 35-day demo rating from digital platforms and ranked behind only Brooklyn Nine-Nine on its platforms.

While streamers like Netflix have revived multiple canceled broadcast shows (ABC’s Designated Survivor, Fox’s Lucifer, etc.) A.P. Bio is the first broadcast comedy to be revived by a streaming service under the same corporate umbrella. The series will join library content starting with The Office, which the service acquired in a five-year, $500 million deal following a pricey bidding war with Netflix.

Few details are known about NBCU’s streaming service, which is set to launch in 2020. The ad-supported platform will feature TV and film franchises from within the company as well as homegrown original programming and content from outside studios. The only other series to be earmarked for the platform is Emmy Rossum starrer Angelyne, from showrunner Sam Esmail and based on The Hollywood Reporter’s feature story about the life of the L.A. billboard diva. Bonnie Hammer will oversee the platform that will rival Netflix, and fellow upstarts Apple, Disney+ and WarnerMedia’s HBO Max.