Archives
« ‘Ghostbusters 3’ Teaser Trailer: The franchise is going straight ‘Stranger Things’ and why not?
Steve Carell starring in Netflix series based on Trump’s SPACE FORCE, reteaming with ‘The Office’ creator Greg Daniels » 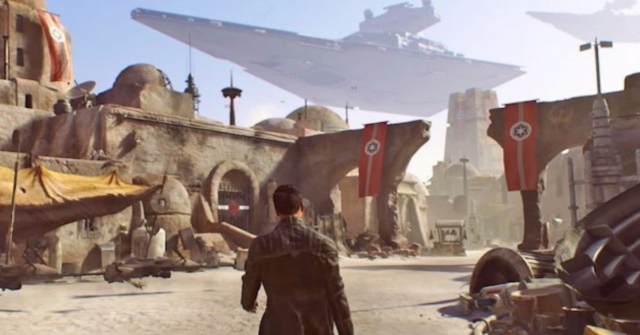 EA has canceled its open-world Star Wars game, again. My goodness, my gracious. The company looked at the early-in-development title and thought to itself, “we need Star Wars movie sooner than this can yield it” and, yup, dead. EA’s handling of the Star Wars license has been a fucking travesty up until this point, and well. Why change now? Keep churning out half-baked multiplayer titles and deny the public the open-world single-player experience its clamoring for.

Electronic Arts has canceled its open-world Star Wars game, according to three people familiar with goings-on at the company. The game, announced alongside the shutdown of Visceral Games back in 2017, had been in development at EA’s large office in Vancouver.

EA Vancouver, a large studio that mostly handles support for a variety of the publisher’s games including FIFA and Battlefront, had been working on this open-world Star Wars game since October 2017, when EA closed Visceral Games. Until then, Visceral—best known for its popular Dead Space horror series—was developing its own Star Wars game. That project, code-named Ragtag, was a linear action-adventure game directed by Uncharted director Amy Hennig. EA Vancouver had been assisting on the project, and when EA closed Visceral Games on October 17, 2017, the Vancouver studio took it over.

But it wouldn’t be accurate to say that EA Vancouver’s Star Wars was the same game as Ragtag. When EA Vancouver took over, it rebooted this Star Wars project entirely, keeping some of the art assets but transforming it into an open-world game.

Now, that project is canceled, too. (EA did not immediately respond to a request for comment.)

EA had not shown any of EA Vancouver’s open-world Star Wars game publicly, but the publisher talked about it when it announced Visceral’s demise. “It has become clear that to deliver an experience that players will want to come back to and enjoy for a long time to come, we needed to pivot the design,” the company said at the time. “A development team from across EA Worldwide Studios will take over development of this game, led by a team from EA Vancouver that has already been working on the project.”

In June 2018, EA announced that it had expanded its Motive studio—previously a single office in Montreal led by industry veteran Jade Raymond—to a Vancouver location as well. That one would also be located in the publisher’s large office in Burnaby, British Columbia, as a division of EA Vancouver.

On October 22, 2018, EA announced that it had installed executive Samantha Ryan to oversee Motive. Subsequently, Raymond left the company.

It’s not clear what EA Vancouver’s next new game will be. We’ve heard it might be a different Star Wars project. Respawn, the Los Angeles-based studio responsible for Titanfall, is also making a Star Wars game, called Jedi: Fallen Order. That game is currently scheduled for fall 2019.

UPDATE (10:17pm): Since the publication of this article, I’ve talked to several more people familiar with EA Vancouver’s now-cancelled open-world Star Wars game. This project, which was code-named Orca, was very early in development but would involve playing as a scoundrel or bounty hunter who could explore various open-world planets and work with different factions across the Star Wars universe.

When EA’s top decision-makers looked at their road map for the next few years, they decided that they needed something earlier than the planned release date for Orca, according to two people familiar with what happened. So they cancelled Orca in favor of a smaller-scale Star Wars project that’s now aimed for much sooner—likely, late 2020, which also happens to be around the time that I’ve heard next-gen consoles will launch. (Might be a bit earlier; might be a bit later. From what I’ve heard, next-gen plans are definitely still in flux.)

To EA’s credit, those people said, the publisher did not lay anyone off as part of this transition. This news comes at a time of cost-cutting across the industry, at major publishers including both EA and Activision, as we’ve reported. Some at the studio also hope that Orca might be restarted after this new project is finished.