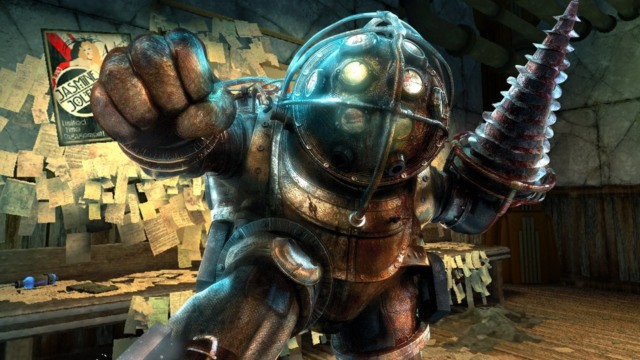 It was announced by some 2K Czar a couple of years ago that BioShock would be a persistent franchise. Yet since then, we ain’t heard much. Well, the rumblings are coming, folks. And they aren’t just the diarrhea rumblings in my bubble guts after the latest weekend of gluttony. They’re another kind of bio-rumbling.

After Irrational Games was dismantled in 2014, the future of the Bioshock IP was left twisting in the wind. It certainly wasn’t going to fall on former studio head Ken Levine, as he departed to run a smaller studio called Ghost Story Games which would have nothing near the production scale required to take on a new time-period magic-potion exercise in the violence of political ideologies and/or golf. But as part of a much larger 2K expose written this week over at Kotaku, it appears news has leaked regarding a Bioshock title in development at a super secret 2K studio. Or at least, you know, previously super secret.

Jason Schreier’s Kotaku piece is a deep dive into the failures at Hangar 13, whose Mafia III seemed like the start of bigger and better things, and they had both a sequel and a spy game in pending development… when everything got shut down. The article on Hangar 13 is absolutely worth your time to see what’s going on in an industry spiraling from a lack of leadership. Somewhat buried in the piece are details regarding Parkside, a game I am intrigued to learn more about.

“Next door, a small group of people were working on a project code-named Parkside, quietly recruiting from across the video game industry for a game so secret, they wouldn’t even tell their colleagues at Hangar 13 about it,” the report says. “Word got out, though, that it was in fact a new game in one of the most interesting shooter franchises of the past decade: BioShock.”

“They’re trying to be really smart about figuring out what the core thing is,” one person involved with the project said. “They’re careful about not falling into the same problem every studio has, where they have too many people and nothing for them to do.”

What Bioshock looks like without Ken Levine is, uh, open-ended to say the least. And this is… you know… rumor mill stuff about a thing in pre-prod at best?

Admittedly, I thought these teasers from 2K in 2015 were for a Bioshock sequel, even though they turned out to be for XCOM 2. And… that started my obsession with wanting a Bioshock/XCOM game. 2K, I have many pitch documents drawn on cocktail napkins to send your way. Reach out to me, y’all.