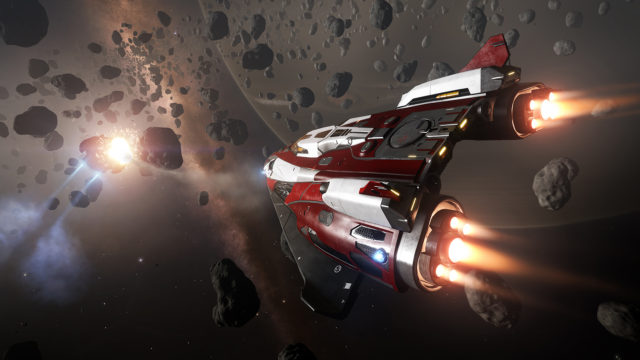 I’ve been fixing to play Elite: Dangerous for a good goddamn while. The problem? The snag? The reason prohibiting me from being a complete garbage lord space trucking shit face? The title wasn’t on PlayStation 4. This June! Fuckers! Everything changes.

Elite: Dangerous was pegged for a second-quarter launch in 2017 and the launch date, announced today, will just beat that deadline: June 27.

Elite: Dangerous has been due for a launch on PlayStation 4 ever since the project’s Kickstarter was successfully funded back in 2013. When Frontier announced in Decemberthat the game was coming in 2017, the publisher promised it would make “full use” of PS4 Pro capabilities.

Additionally, a retail edition of the game for PlayStation 4, Windows PC and Xbox One will also go on shelves by the end of June. Packaged as the Elite: Dangerous Legendary Edition, it includes the Horizons expansion and 1,000 Frontier points, the in-game currency.

Horizons, added to the game at the end of 2015, added a slew of features to the game, including planetary landings and exploration with ground vehicles, multicrew co-operative play and a crafting system. Our hands-on impressions of the expansion called it “a space adventure unlike any other.”