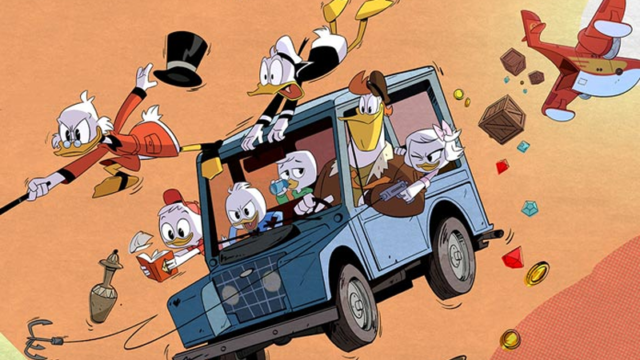 I wasn’t going to fuck with the new DuckTales. I wasn’t. But man, given the talent lined-up behind it, I’m going to have to give it a chance. David Tennant. Danny Pudi. Ben Schwartz. Fantastic.

We’ve known that Disney is doing a brand new DuckTales for a while, but now we’re starting to get some solid details about who’ll be providing the voices of our feathered friends… and it turns out a former Time Lord and Marvel villain is lending his brogue to Scrooge McDuck himself.

Joining Tennant’s Scrooge McDuck will be Danny Pudi, Ben Schwartz, and Bobby Moynihan as Huey, Duey, and Louie, respectively. The main cast is rounded out with Toks Olagundoye as Mrs. Beakley, Beck Bennett as Launchpad McQuack, and Kate Micucci as Webby Vanderquack.

Holy cow, that’s one hell of a cast. DuckTales is set to premiere in the summer of 2017 on Disney XD.

The full voice cast of the new series was revealed today, courtesy of the only way a new DuckTales cast should be revealed: a video of them all singing the classic theme tune for the show. Woo-oo!