Kate Bishop is getting her own Hawkeye title! 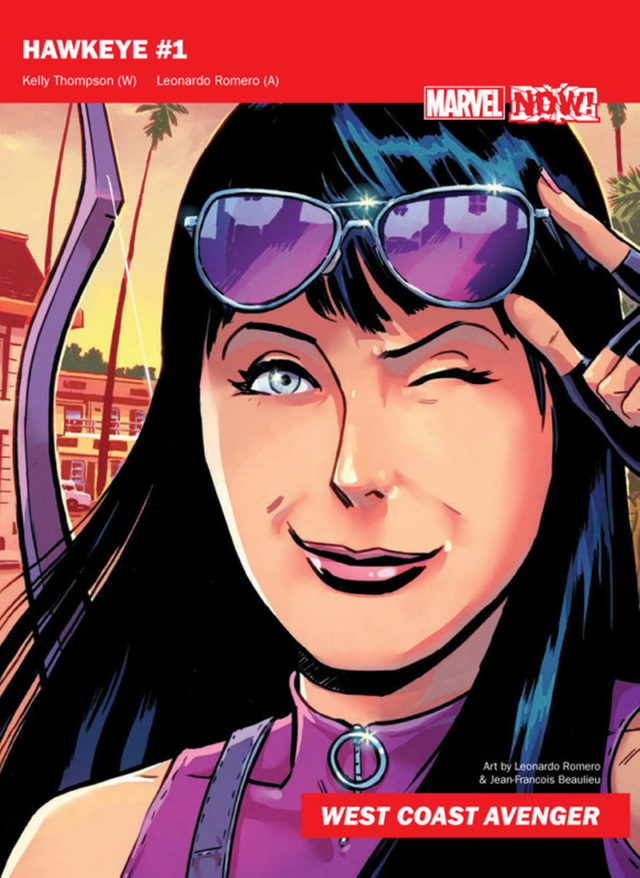 Kate Bishop is getting her own Hawkeye title, courtesy of Kelly Thompson, Leonardo Romero and Jordie Bellaire. Fuck to the yes. I’ve been reneging on reading Marvel lately, or if I’m being honest, keeping up with the comic book grind at all. However! However. This might just be enough to get me back into the House of Ideas.

Fraction’s Hawkeye run and Kieron Gillen’s Young Avengers run, I’ve been jonesing for more Kate Bishop stories. Thanks to an upcoming series from writer Kelly Thompson (Jem and the Holograms, A-Force) and artist Leonardo Romero, I’m getting exactly what I’ve been hoping for: a Kate Bishop Hawkeye solo comic. In an interview with io9, Thompson shared some teasers about what to expect from the upcoming solo series, which she has described as “Veronica Mars with superheroes,” which is, like, the single most beautiful combination of words in the English language (sorry, “cellar door”).

The gist goes like this: Kate heads back out west to Venice Beach in Los Angeles, just like in the Fraction/Annie Wu side jaunt way back when. The premise sounds fairly similar, as Kate’s trying the private investigator thing out again, only this time, the world’s been changed what with the events of Civil War II having taken place. These events inform Kate’s decision to leave the East Coast (again), as she’s said to be looking for a clean break from everything—including her superhero name-twin, Clint Barton.

I’m primarily excited about this solo series because, for starters, more women-led comics are 100% rad. They’re a good thing, something we should totally be encouraging, and giving Kate Bishop—who has, historically, often had to share the limelight—her own comic is a great way of accomplishing that. I’ve said (likely numerous times) before that Fraction/Wu’s Kate-centric story in Hawkeye remains one of my all-time favorite comic arcs of all time. I know this will be different, and I’m certainly welcoming that, but seeing as how Thompson considers this run to be the “spiritual successor” to that, you better believe I’m excited for what they’ve all got planned.

Oh, and AmeriKate shippers: Thompson didn’t confirm anything, but she did mention she’s working on getting America Chavez involved in the series. So, yeah, you know, you’ve got that to look forward to. Insert heart-eyes emoji right here. Yup.