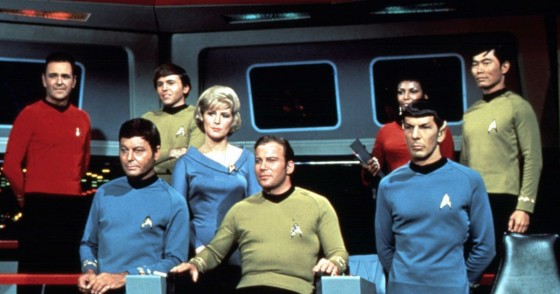 Star Trek turns 50 today, man. I’ve always neglected watching the series, due to distraction, lack of discipline, and the fact that I’m a Garbage Person. But its ideology, and what it put forth, is something I feel to be both genuinely important, and incredibly necessary in these Days of Gloom.

On September 8, 1966, exactly 50 years ago today, the very first episode of Star Trek aired on television. More than just science fiction, it dared to imagine a future for humanity where it had moved past war, inequality, and poverty, replacing them with tolerance, exploration, and hope. And it’s not an exaggeration to say that Star Trek changed the world.

Star Trek has had many incarnations over the years—there have been six television shows, 726 total episodes, 13 movies, and one reboot—but its primary mission has stayed the same. The result is a series that won countless awards (31 Emmys!) but has also fostered a massive fandom that includes actors, politicians, and more. It’s a show that created and made famous many of the tropes that science fiction uses all the time now. It’s a series so influential that an actual spacecraft was named after the fictional starship Enterprise. Scientists have spent years working to turn the fake technology seen in the series into a reality. President Barack Obama is a fan.

On-screen, it helped popularize diversity in popular entertainment. It made all its viewers feel included and inspired. A beautiful example is Leslie Jones telling the story of seeing Whoopi Goldberg on television for the first time and being so thrilled to see someone who looked like her. And that connects back to Goldberg, when she saw Uhura on Star Trek at age nine. “I looked at it and I went screaming through the house,” she said, “‘Come here, mom, everybody, come quick, come quick, there’s a black lady on television and she ain’t no maid!’ I knew right then and there I could be anything I wanted to be.”

It’s a show so ground-breaking that it gets credit for things it wasn’t even the first to do. Kirk and Uhura’s kiss wasn’t the first scripted interracial kiss on television, but everyone thinks it is. But that myth is still part of the influence ofStar Trek, and it’s a myth easy to believe because of how hard Star Trek likes to push the boundaries, to (boldly) go whether other series and movies so seldom do, to reveal what humanity would look like at its most accepting, its most optimistic, and its most noble.

It seems impossible now, but back in 1966, the original Star Trek was not an easy sell—it had two pilots and a major cast change before going on the air—and it was canceled after three seasons, due to low ratings. But thanks to syndication, a loyal fandom arose, one that has only grown over the last five decades. Now it’s an institution. And it’s an institution that will continue, as the series finally returns to TV next year with Bryan Fuller’s highly anticipated Star Trek: Discovery.