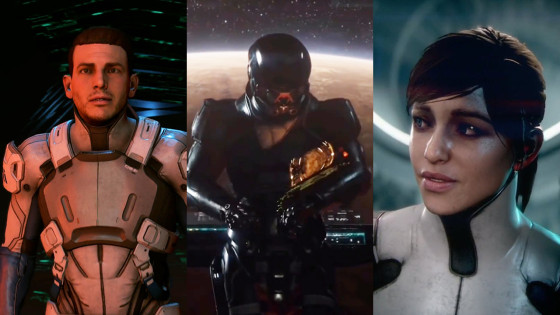 Mass Effect: Andromeda is going to feature a brother-sister pair of heroes in the game. Not only that, but the ominous “N7 guy” who featured in an ME:A trailer way, way back? That is their father. No word on whether or not you can switch between the two characters ala GTA V, but what is known is that no matter who you choose, the other is “out there in the Universe” while you’re playing. Which can really mean a lot, or a little. I’m curious to see.

It’s a first for BioWare’s sci-fi RPG series – back in the original Mass Effect trilogy, your Shepard hero was the only Shepard hero running around the galaxy.

In Andromeda, however, your character has a family. And while it’s unknown if your sibling actually features, the game apparently includes your father.

Remember two E3 conferences ago we saw a mysterious figure in N7 armour? BioWare said at the time the character was not your hero but someone else. Yeah, he’s your dad.
BioWare creative director Mac Walters revealed the news to PlayStation Access while narrating last night’s Mass Effect Andromeda tech demo, shown off at Sony’s PlayStation Meeting event.
“We’re seeing our male character, at E3 we got to see our female character,” Walters said. “A little surprise here – these two are actually brother and sister.

“They both exist in the game world at the same time. If you’re playing as the female Ryder, your brother is out there somewhere in the universe.
“The character we saw two E3s ago, the N7, is actually your father. So we have got the full Ryder family revealed. We’ll do names and things in the future.”

This raises a couple of interesting questions. Mass Effect has always let you edit your hero character’s design – will these choices now also affect your father and other sibling? Or, like Dragon Age 2, will these be set?

We just hope our Ryder can still be named – our shortlist already includes Knight Ryder, Winona Ryder and Park & Ryder.

Finally, Walters confirmed that last night’s demo was cut together and specifically designed to focus on environment and characters – so don’t worry too much that it didn’t contain the usual dialogue choices.

You can watch the whole thing again in 4K right here, and find out how the new Remnant aliens confirm various story leaks from last year.