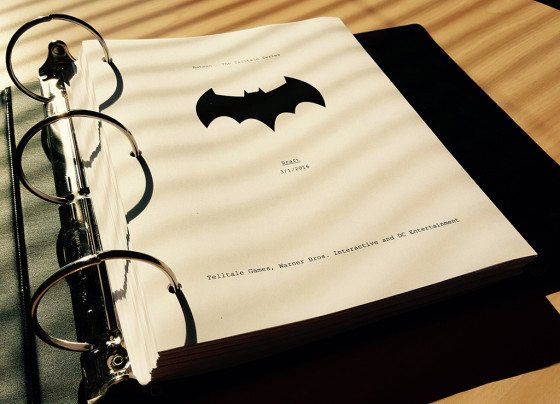 Telltale’s Batman game is dropping this summer. Oh! And it’s going to be “R-Rated “or some shit. Is #ThanksDeadpool the geek version of #ThanksObama?

Telltale Games‘ Batman is coming for you and he’s coming this summer. During the “Batman: Telltale Unmasked” panel at SXSW today, Telltale’s team gathered to discuss the game in (little) detail, offering a bit of insight into what to expect from its second DC Comics adventure game. While much of the game is still very much under wraps, Telltale did spill the beans on the release window. Summer might not be a definitive timeline, but there are several major conventions during those few months wherein a more concrete announcement might take place.

The other major reveal was more about the tone of the upcoming Batman adventure, which will stay very much in line with previous Telltale games like The Wolf Among Us and The Walking Dead. While this won’t be the first time a potentially “M” rated Batman game will see release, the panel compared it to an R-rated film, which may raise some eyebrows. There’s been a bit of consternation around the director’s cut of the upcoming Batman V Superman: Dawn of Justice feature, and knowing that Telltale’s game might be in that same vein might turn a few fans off.

Telltale’s Batman writers Nick Herman and Pierre Shorette were joined by executive producer TQ Jefferson, CEO Kevin Bruner, and head of creative communications Job Stauffer on the panel. This upcoming game will attempt to get to the core of who Bruce Wayne is, and while there’s no set ratio of Bruce:Batman in place, the team is trying to make it more about Bruce. You will however get some say in which of the Dark Knight’s personas deal with certain decisions. This will in turn impact later elements, a staple of the Telltale formula, and help shape your own personal version of Gotham City.