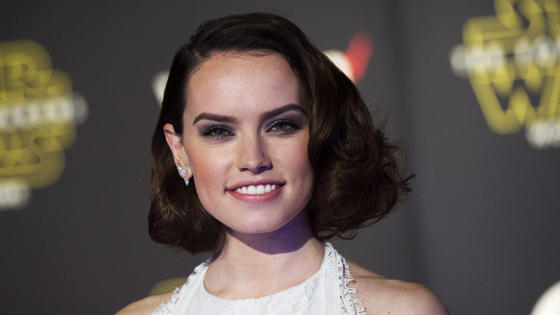 Daisy Ridley has only appeared in two movies: the British horror film Scrawl, and something called Star Wars: The Force Awakens. Guess which made $2 billion at the box office, and which doesn’t have that information listed on the film’s Wikipedia page. It’s not a bad start to the 23-year-old’s career, which may get even more insane if Deadline’s report that Ridley is being considered to play Lara Croft is true. The first two Angelina Jolie-starring Tomb Raiderfilms, Lara Croft: Tomb Raider and The Cradle of Life, are everything critics say about video game movies — stiff, nonsensical, too much P.O.D. — but a good Croft story could happen in the correct hands. Find the right actress, turn her into a female Indiana Jones (whose entire personality isn’t “has comically exaggerated breasts”), and you’ve got yourself a fun movie.

Daisy Ridley would be the “right actress”:

Deadline understands that the fresh-faced Ridley is one of a number of actresses being considered for the Tomb Raider reboot that Warner Bros and MGM are partnering on to produce and release.

Deadline reports that “conversations have taken place,” but alas, “this is still very early and there have been no official negotiations or offer yet.” Casting Ridley (who’s really good at fighting back) as Croft makes too much sense, which probably means the part will go to Josh Gad, or something.