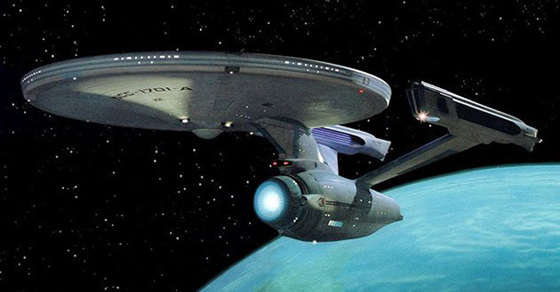 People love Bryan Fuller. I don’t really know him well, but I trust people. So I guess it’s excellent news that he is producing the new Star Trek TV series.

This is the best possible choice. Bryan Fuller—who worked on Star Trek: Deep Space Nine and Star Trek: Voyager back in the day, before going on to createPushing Daisies, Wonderfalls and Hannibal—is masterminding the new Star Trek TV show.

In a statement, Fuller was quoted as saying:

My very first experience of Star Trek is my oldest brother turning off all the lights in the house and flying his model of a D7 Class Klingon Battle Cruiser through the darkened halls. Before seeing a frame of the television series, the Star Trek universe lit my imagination on fire. It is without exaggeration a dream come true to be crafting a brand-new iteration of Star Trek with fellow franchise alum Alex Kurtzman and boldly going where no Star Trekseries has gone before.

Fuller has been trying to get a Star Trek series off the ground for nearly a decade. Back in 2008, he told IF Magazine:

I told my agent and told the people of J.J. Abrams team I want to create another STAR TREK series and have an idea that I’m kicking around. I would love to return to the spirit of the old series with the colors and attitude. I loved VOYAGER and DEEP SPACE NINE, but they seem to have lost the ‘60s fun and I would love to take it back to its origin.

The new Trek series (which is being executive produced by Alex Kurtzman) will premiere on CBS in 2017, before moving to digital streaming.

Entertainment Weekly points out that Fuller has teased a few different ideas forStar Trek TV shows in the past. At one point, he said it would be interesting to see how the Next Generation era looks, in the altered timeline of the J.J. Abrams films. In another interview, he said it would be cool to have a show that follows another starship, the U.S.S. Reliant, and that he’d love to cast Angela Bassett as the captain and Rosario Dawson as the first officer.

Fuller is already showrunner of the American Gods series on Starz, and is also spearheading the new version of Amazing Stories.