Archives
« (Fave) Cyberpunk novel ‘Altered Carbon’ is becoming Netflix series
Views From The Space-Ship: Upon the Plains of Frost » 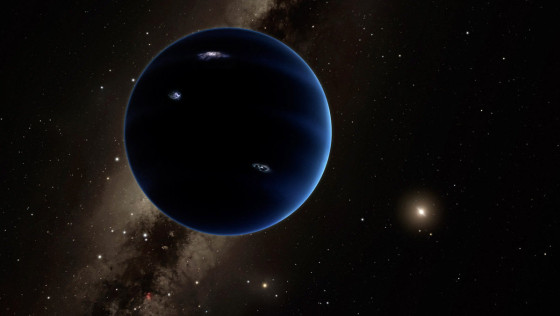 AstronomerWizards, using their WizardryMathematics, have apparently (maybe) found a ninth planet in our solar system. One way out past Pluto, which orbits the sun every 15,000 years.

The solar system appears to have a new ninth planet. Today, two scientists announced evidence that a body nearly the size of Neptune—but as yet unseen—orbits the sun every 15,000 years. During the solar system’s infancy 4.5 billion years ago, they say, the giant planet was knocked out of the planet-forming region near the sun. Slowed down by gas, the planet settled into a distant elliptical orbit, where it still lurks today.

The claim is the strongest yet in the centuries-long search for a “Planet X” beyond Neptune. The quest has been plagued by far-fetched claims and even outright quackery. But the new evidence comes from a pair of respected planetary scientists, Konstantin Batygin and Mike Brown of the California Institute of Technology (Caltech) in Pasadena, who prepared for the inevitable skepticism with detailed analyses of the orbits of other distant objects and months of computer simulations. “If you say, ‘We have evidence for Planet X,’ almost any astronomer will say, ‘This again? These guys are clearly crazy.’ I would, too,” Brown says. “Why is this different? This is different because this time we’re right.”

Outside scientists say their calculations stack up and express a mixture of caution and excitement about the result. “I could not imagine a bigger deal if—and of course that’s a boldface ‘if’—if it turns out to be right,” says Gregory Laughlin, a planetary scientist at the University of California (UC), Santa Cruz. “What’s thrilling about it is [the planet] is detectable.”

Batygin and Brown inferred its presence from the peculiar clustering of six previously known objects that orbit beyond Neptune. They say there’s only a 0.007% chance, or about one in 15,000, that the clustering could be a coincidence. Instead, they say, a planet with the mass of 10 Earths has shepherded the six objects into their strange elliptical orbits, tilted out of the plane of the solar system.

The orbit of the inferred planet is similarly tilted, as well as stretched to distances that will explode previous conceptions of the solar system. Its closest approach to the sun is seven times farther than Neptune, or 200 astronomical units (AUs). (An AU is the distance between Earth and the sun, about 150 million kilometers.) And Planet X could roam as far as 600 to 1200 AU, well beyond the Kuiper belt, the region of small icy worlds that begins at Neptune’s edge about 30 AU.

If Planet X is out there, Brown and Batygin say, astronomers ought to find more objects in telltale orbits, shaped by the pull of the hidden giant. But Brown knows that no one will really believe in the discovery until Planet X itself appears within a telescope viewfinder. “Until there’s a direct detection, it’s a hypothesis—even a potentially very good hypothesis,” he says. The team has time on the one large telescope in Hawaii that is suited for the search, and they hope other astronomers will join in the hunt.

Batygin and Brown published the result today in The Astronomical Journal. Alessandro Morbidelli, a planetary dynamicist at the Nice Observatory in France, performed the peer review for the paper. In a statement, he says Batygin and Brown made a “very solid argument” and that he is “quite convinced by the existence of a distant planet.”

Championing a new ninth planet is an ironic role for Brown; he is better known as a planet slayer. His 2005 discovery of Eris, a remote icy world nearly the same size as Pluto, revealed that what was seen as the outermost planet was just one of many worlds in the Kuiper belt. Astronomers promptly reclassified Pluto as a dwarf planet—a saga Brown recounted in his book How I Killed Pluto.