Archives
« Paul Dini and Eduardo Risso teaming for ‘Dark Night: A True Batman Story’, an original graphic novel
‘Final Fantasy XV’ is playable from start to finish. This is news? »

Russia planning to build a Lunar Base by the 2030s; Cosmonauts Get! 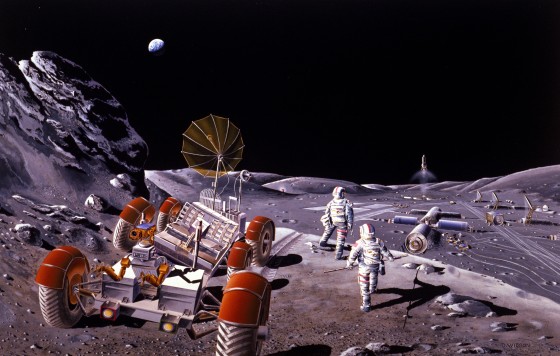 Fuck yeah! It’s about time someone began planning to build some gnarly structures on the Moon. Do you hear that, United States? There are people aiming to get back to the Moon! Take the bait! Begin making your own Lunar Base plans! Let’s get the SpaceBasedArmRace going again. Please!

Decades and decades after they pretended never to be in a “moon race” with the U.S., Russia reportedly plans to land cosmonauts on the moon by the 2030s, according to the news agency TASS. The most recent plans call for up to six launches of the Angara A5V heavy-lift rocket to put enough hardware into orbit for their first mission, which appears to involve establishing a lunar base.

A lunar base, for real. Long the stuff of science fiction, it seems Russia is trying to do this for real, or at least wants to. The BBC reported in October that the Russian and European space agencies are preparing to go to the moon with an eventual settlement in mind.

The most obvious difference between the plans for Russia’s first manned lunar mission and the American one 46 years ago is in the number of launches. The U.S. did it with one massive Saturn V launch, so why are the Russians planning a mission that requires so many launches?

Part of the reason is that the Saturn V had about four times the lifting capacity of the Angara rockets, but that’s not the full story. Back when the Russians wore more red and called themselves the ‘Soviets.’ they also tried the single, massive launcher approach to a moon landing: the failed N1 rocket. It’s not that I don’t think the Russians couldn’t build a working, massive launch vehicle, I just think they realized for them it doesn’t make sense.

The Angara rocket will eventually replace the Russian workhorse heavy-lift rocket, Proton. It makes more sense to develop a launch vehicle that has commercial and other uses as well, as opposed to building a massive super-heavy lift vehicle. The US only used the Saturn V for the seven moon landing launches (only six made it; if you’ve seen Apollo 13, you know the story), the lunar-and-earth orbiting manned and unmaned Apollo test missions, and then once again to launch Skylab, America’s first space station.

The Saturn V was a tremendous achievement, but it wasn’t exactly a useful multi-purpose launch vehicle, and I think the Russians want the Angara to get them to the moon and make some money launching satellites.

The other reason is that, according to sources talking to TASS, the first Russian mission to the moon will be more than a “flags and footprints” deal—they want to establish an actual lunar base, of some sort.