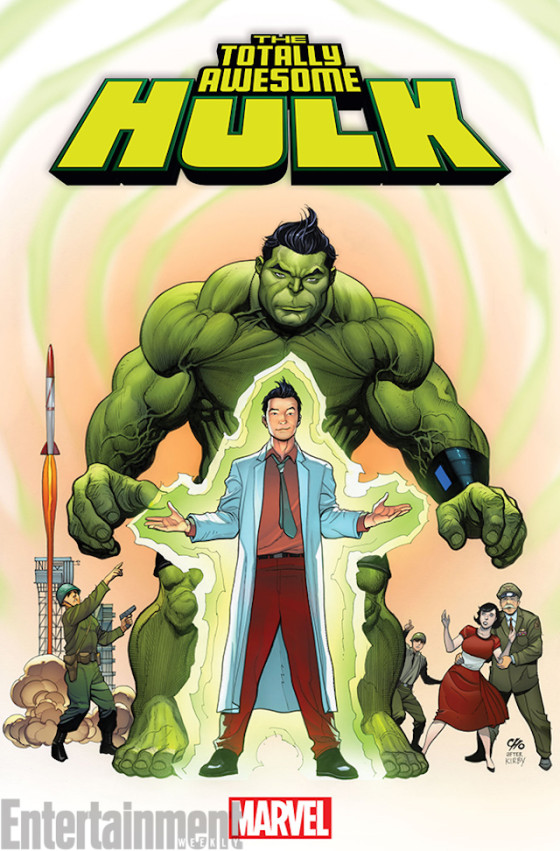 Marvel has revealed the identity of the new Hulk, and its Amadeus Cho. I don’t know Amadeus Cho. At all. Do you? Is this cool? Help?

When Marvel announced its All-New, All-Different line-up at the start of July, it tried to keep a few secrets in reserve. Chief among them was the identity of the star of Greg Pak and Frank Cho‘s new Hulk title, Totally Awesome Hulk. It’s a strategy that’s worked for the publisher in the past, with the identity of the Red Hulk (Thunderbolt Ross) generating plenty of buzz; the company even repeated it without a Hulk, keeping the current Thor’s alter ego under wraps for several months.

For anyone unfamiliar with the character, Amadeus Cho is a boy genius who made his debut in Amazing Fantasy #15 in 2006, created by Pak and Takeshi Miyazawa. He’s served time as a sidekick to both Hulk and Hercules and, like Bruce Banner, he’s one of the smartest people in the Marvel Universe. He was the obvious choice for the Totally Awesome Hulk not only because of his connection to Pak and Cho — who chose Amadeus as a lead character in his Savage Wolverine run — but because of the ‘totally awesome’ vernacular that pointed to a younger character.

Entertainment Weekly got the exclusive confirmation, and unveiled the uncensored cover to issue #1 for the first time, plus some additional artwork from the book, which launches in December.

Marvel editor-in-chief Axel Alonso told Enterainment Weekly that the idea arose from an editorial retreat, saying, “Amadeus came to mind for a lot of different reasons. One of them is that physically, he’s like Banner: he’s the 98-pound weakling who’s had everything but the physical aspect to make him seem super cool. And secondarily is that he’s so different from Banner. He shares the monstrous intellect but he’s so different — he’s a teenage kid, who’s hasn’t lived much yet.” Alonso also noted that Cho will be the only Hulk in the new Marvel Universe, though he may have meant the only male Hulk, as She-Hulk still has a starring role in A-Force.

Marvel presumably never intended to tease this revelation out for as long as it did for the Red Hulk; Red Hulk’s face never needed to be hidden to keep his secret. This Hulk has perceptibly more typically Asian features, so the 99% certainty that it was Amadeus Cho would have leaped  that last 1% as soon as the cover came out.

So yes, we have our first Asian American Hulk — Korean American, in fact, and from a Korean American creative team. That’s another small step towards a more diverse mainstream superhero comics industry, and another good reason for Marvel to make the reveal well in advance. It’s much easier for us to get excited about this series now we know for certain that it’s putting a spotlight on Amadeus Cho.