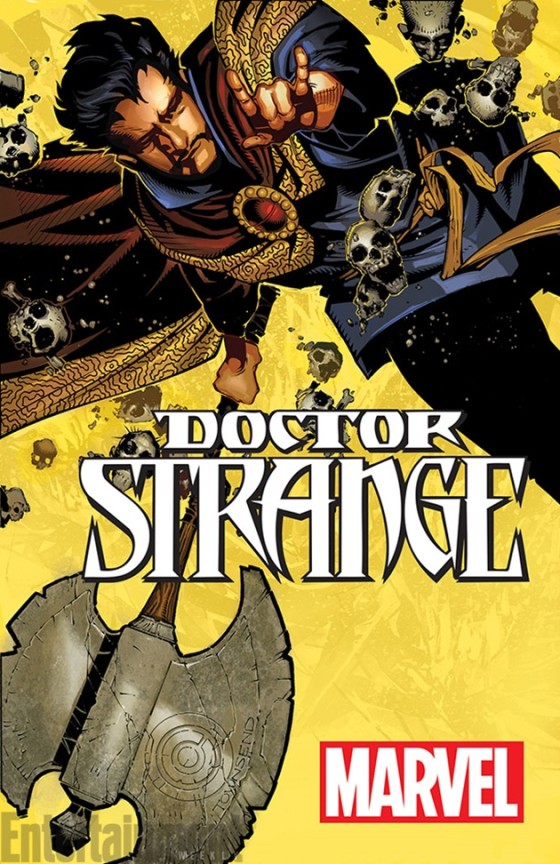 Must be a coincidence. There’s like, no way that Marvel is launching a monthly Doctor Strange comic book as Marvel Studios is preparing his movie as a means to seed the pop culture’s collective consciousness. They wouldn’t do that, right? This new Doctor Strange comic is coming because the public wants it! Demands it! (All joking aside, cool creative team.)

It’s been almost twenty years since Marvel last attempted an ongoing Doctor Strange comic, despite the character having a reputation as one of the most pitched characters among writers. During his tenure as editor-in-chief, Joe Quesada always said he was waiting for the right pitch to come along. That right pitch must have finally arrived — just in time for the next Marvel line-wide relaunch, and in good time for next year’sDoctor Strange movie — because Entertainment Weekly today unveiled a new Doctor Strange #1 from Jason Aaron and Chris Bachalo.

Doctor Stephen Strange, master of the mystic arts and once and future sorcerer supreme, is probably the biggest Marvel solo hero to spend so much fallow time between series, though he’s had a number of mini series over the years, including the acclaimed The Oath by Brian K Vaughan and Marcos Martin, and Strange by J. Michael Straczynski, Samm Barnes and Brandon Peterson. The character’s potentially vast abilities, and the relatively amorphous state of magic in the Marvel Universe, makes him at once a difficult character to get to grips with and an endlessly appealing one for any writer looking to plumb the chthonic depths of a superhero universe.

The movie made a new ongoing series seem inevitable even before Marvel sent out pictures of Strange wielding a great big axe. Given that the character himself is not a proven commodity, he always seemed likely to end up in the hands of one of Marvel’s biggest established names, and of those, Jason Aaron seems like a great fit, given how well he’s handled the epic fantastical side of Marvel in his various Thor series. Perhaps we should have guessed it would be Aaron; in retrospect the axe seems like a big clue.

Speaking to Entertainment Weekly, Aaron was quick to establish limitations for the potentially god-like Strange; “We wanted a Doctor Strange who was always having to work for what he gets, and to show that when he shows up and uses his powers, it’s not like Captain America throwing his shield or Thor throwing his hammer. Strange has to worry about repercussions that those other heroes don’t have to worry about, because he’s a Sorcerer Supreme. We’re talking about the forces of magic … everything he does, there’s a price to it.”

As for Chris Bachalo, he’s always excelled at creating a kind of loopy, unravelling world through immaculately well-crafted page composition, so letting him loose on Marvel magic feels pretty perfect. Interestingly, Aaron and editor Nick Lowe have described the book as having a more superheroic bent. Regarding Stephen’s axe, Aaron said, “[W]e don’t want him to just be the guy who stands there and shoots blasts of magic energy out of his hands. We want him to be able to dive into different kinds of fights. So we’ll see him use his power and use a lot of different weapons in very different ways. And yeah, Chris is having a blast with that, the way he draws, a very active superhero version of Doctor Strange.”