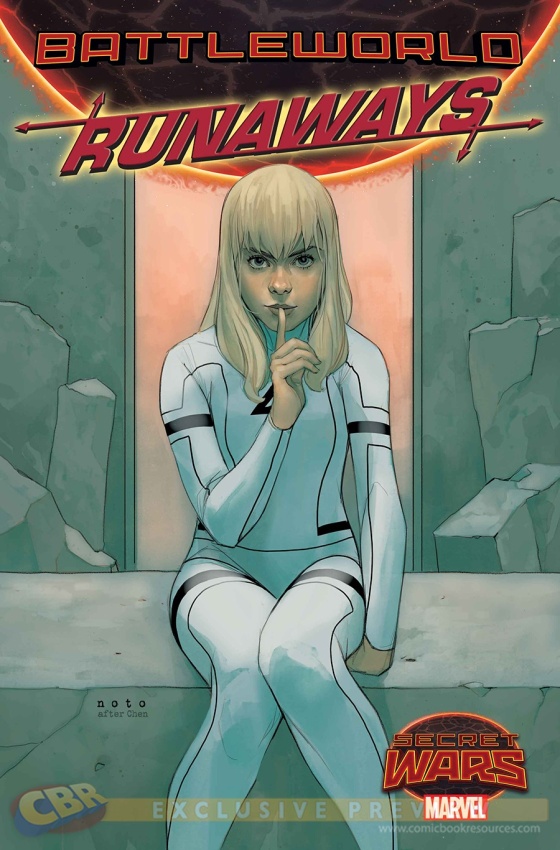 I’ll say this: I can’t complain about Marvel’s upcoming Secret Wars/Battleworld bullshit. Not anymore. Not with how many dope comic series it is generating in the face of the MARVEL OMNIVERSE smashing together. The latest dope announcement? Runaways lives again!

Today, Marvel announced news that made me run around my living room shrieking like only a fangirl can: they’re bringing back Runaways.

One of my all-time favorite Marvel comics and a great entry into the Marvel universe, the original Runaways came to us from some of the greatest minds in comics, including Brian K. Vaughan, Adrian Alphona (currently the artist onMs. Marvel), and even Joss Whedon. In this highly-underrated series, a group of teens discover that their parents are members of a collective of supervillains called The Pride, and band together to take their folks down. The book has an incredible cast of female characters (including girls with divers sexualities, races, and body types), and one of them even has a pet velociraptor. You can also find cameos from lots of familiar Marvel faces, like Captain America, which makes the journey into other Marvel comics a little easier.

What makes this good news into great news is that the new Secret Wars Runaways will be penned by none other than Lumberjanes‘ Noelle Stevenson, with art by Sanford Greene of Uncanny Avengers. Stevenson said that her comic will involve lots of established teens from the Marvel universe comprising a new, unique team of “rough and rowdy punk[s].” According to Stevenson, “They’re a group who wouldn’t necessarily choose to hang out with each other under normal circumstances—and actually outright hate each other in a few cases—but end up having to work together to survive and find out that they have more in common than they thought.”

The new Runaways will all attend a school together in Battleworld—but everything it not as it seems. “A lot of emphasis is placed on being the strongest and coming out on top no matter what,” Stevenson said, “and aggression, competition, ruthlessness and obedience are prized, so some of these kids are pretty messed up by that.” Instead of supervillain parents, it’s their supervillain headmaster against which they’ll be rebelling. “It’s [about] reevaluating how you were raised and the people who raised you and deciding what it actually is you want for yourself outside of that,” she explained.

I must confess: I have not read Lumberjanes, nor am I familiar with Noelle Stevenson. I must confess: all the positive reaction surrounding her hand in the Runaways‘ resurrection has me eager to dig into her work.