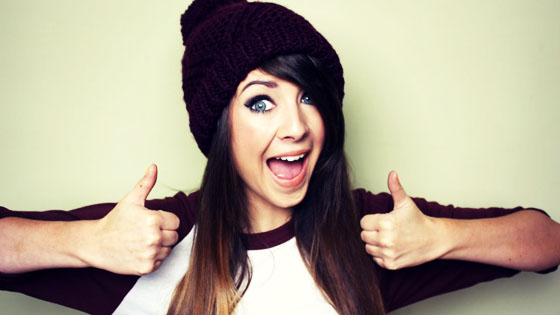 Let me be clear. I don’t know Zoe Sugg. I don’t know if her vlogs are any good. I’m just excited that someone has erupted out of a somewhat-new cultural avenue to dominate something as antiquated as the “best selling books” list. At least for now this celebrity born out of the YouTube-Universe is the best selling debut novelist in the UK. Ever. Will she succeed going forward? Who the fuck knows. But petulant, authority-dismissing me likes this.

British fashion vlogger Zoe Sugg — better known as Zoella — has become the UK’s best-selling debut novelist, shifting more copies in first week sales than J.K. Rowling, Dan Brown, or E.L. James. Her book, Girl Online, is being sold as a “modern day Notting Hill for teens” and follows the adventures of 16-year-old Penny Porter whose personal blog goes viral after she falls in love with a New York rock star.

The novel sold 78,109 copies in the week beginning November 25th, according Nielsen BookScan figures reported by The Telegraph, easily beating Fifty Shades of Grey(14,814 copies in the first week) and Angels and Demons (98 copies). It also handily outstrips the initial print run of 1,000 for the first ever Harry Potter book — although, as with the previous examples, Harry Potter author J.K. Rowling didn’t have a huge, ready-made fan base queueing up to buy her work. (Consequently, it’s worth noting that debut sales aren’t necessarily indicative of prolonged future success.)

I mean — seriously. Fuck it. Fuck the submission process. Fuck the cliquey mechanisms that result in publishing. A middle-finger to Power (or perhaps old iterations of power) and a hardcore following have brought this to life.