Archives
« ‘Godzilla 2’ is happening. And they’ve revealed the monsters. Already?
Cosplay: Genderbent Comedian from ‘Watchmen’ worth burning the world with » 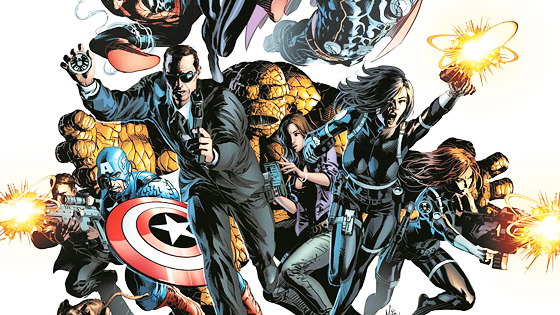 Maybe it’s telling, but all I can fucking think about when reading that Mark Waid will be bringing Agents of SHIELD to Marvel’s comic universe is this: “What the fuck is going to happen to Weaver and Hickman’s SHIELD?” Cause honestly? If the former is going to cause the latter’s demise — fuck that.

“Marvel’s Agents of S.H.I.E.L.D.” debuted on ABC in September 2013, and ever since then — well, actually even before then — fans have wondered if Marvel might capitalize on that to some degree on their publishing side.

That answer came Sunday at Comic-Con International in San Diego during Marvel’s “Next Big Thing” panel, with the announcement of a “S.H.I.E.L.D.” ongoing series written by Mark Waid (also announced at the show to be writing a “Star Wars: Princess Leia” series debuting in early 2015). Scheduled to debut in December — which will be a few months into the second season of “Agents of S.H.I.E.L.D.” — the series will feature rotating artists on each one- or two-issue story, starting with Carlos Pacheco and also including the likes of Chris Sprouse and Alan Davis.

This “S.H.I.E.L.D.” series is firmly entrenched in the current continuity of the Marvel Universe, not an adaptation of the live-action world — though TV characters like Fitz, Simmons and Melinda May will make their comic book debuts. And while the “Agents of S.H.I.E.L.D.” TV show has to deal with practical matters like budgets and actors’ schedules, the “S.H.I.E.L.D.” comic will be able to go as big as it wants to, and bring as many superhero guest stars as fit the narrative.