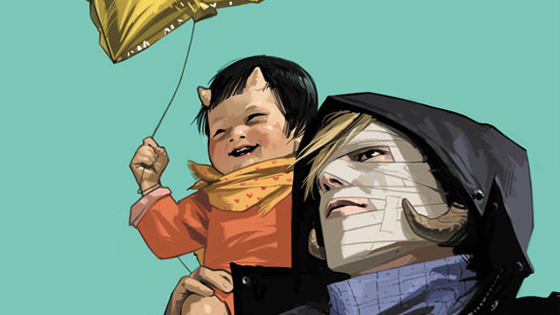 One comic to lift your spirits, one comic to dash them down.  One comic that will keep you up at night, one comic that feels like a warm blanket of comfort.  That’s the beauty of Wednesday’s, ladies and germs – that’s the beauty of comics!  Every week we get not one but many stories to choose from, to be read in whatever order we choose (and we ALL have an order), to put us in whatever kind of mood we want to be in.  Sometimes, though, one book can be all those things – one story can contain many.  Comedy, tragedy, love, and loss.  A book that mirrors the ups and downs of life would have to be pretty intricately woven, though, wouldn’t it?  It couldn’t be just one person’s story, or even one family’s.  It may even envelope an entire galaxy.  We call that kind of story a Saga, and this week Image Comics proudly delivers another chapter.  So step inside and lets discuss epic sci-fi fantasy, gods and monsters, teen superheros, and the adaptability of humanity.  Yeah, we get deep this week, kiddies. 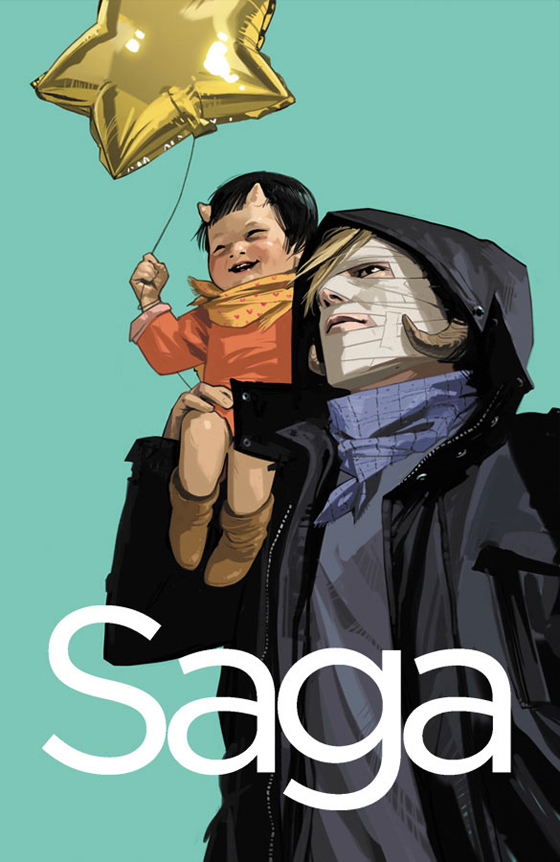 Saga is one of the few books I’ll usually try and read before I write up this column – I’ll buy it digitally in the morning, and then trudge out into the daylight to grab my hard copy.  Why?  Well, it’s typically one of the books we like to pimp pretty hard here at OL, and I like to be on top of the reasons why.  This week is no different – I sat with my coffee in one hand, bagel in the other, and dove right in.  WOW – the solicits for this issue (“Something Terrible Happens”) were on point!  And maybe not just one something terrible, but a few.  Not content to let our favorite hybrid-space-family breathe (well, they did get a breather, but we didn’t get to see it), Vaughan and Staples start planting new plot points into the story, sewn carefully into this issue are new developments for Marko & Alana – they may develop into big changes for the bunch, or red herrings to throw us off the darker happenings in their galaxy, most notably with Prince Robot’s family. Saga has it all, friends:  love, sex, death, adventure, violence, comedy, and pain – and that’s just this issue.  It is a book that stays with me long after I read it, and has me aching for the next issue the moment I put the newest one down.  It is a love letter to life wrapped up in silly space costumes, horns, and wings.  Don’t miss it. 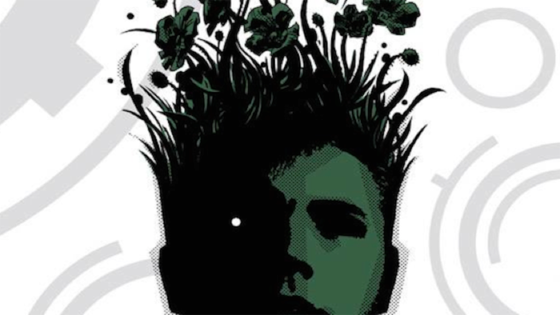 Not content with a mere $3 of my monies this week, Image is dropping a slew of interesting reads, but just behind Saga is this fucking gem – The Old Bastard Himself, Warren Ellis, back from Tinseltown and book shilling to show the young whippersnappers how great fucking sci-fi is done.  While the book is ostensibly about giant alien stalks that come to Earth and take root worldwide, communicating nothing except to drown their surroundings in green, acidic slime – it’s really about humanity’s greatest strength:  adaptability.  Though the lives of all seven billion people have changed since the arrival of the trees (and this issue goes into a clearer explanation of how), life still must go on.  Though the acidic slime lays waste to an entire city, other cities around the world still carry on their business, even with a “tree” right in their backyard.  We adapt, we press on, we keep very short-term memories.  Trees isn’t just about alien life coming to our world and finding nothing worth communicating with, this book is about humanity not only surviving, but thriving in the face of doom.  The trees are a metaphor for every bogeyman to ever threaten our existence:  nuclear proliferation, disease, global climate change, drought.  For better or worse, humanity finds a way.   Other Dope Image books this week:  Stray Bullets Killers #4, Cowl #2, Deadly Class #6, Fuse #5, and Walking Dead’s Robert Kirkman drops his new multi-million dollar TV show pitch, I mean comic, Outcast #1 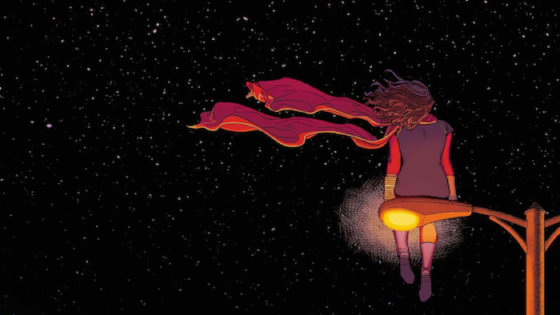 How about that cover, eh folks?  McKelvie is killing it on the covers to a book that doesn’t even really need a cover to sell how good it is.  Nevertheless, this cover perfectly encapsulates where we are with young Kamala Khan.  This is that shot in the movie where our protagonist goes to the highest point in their small corner of the world and looks out at the landscape below them, all twinkling lights and shadow.  Our hero is ready to escape the world they know, and looking to achieve something greater.  The world has grown smaller, is quite literally beneath them, and the next logical step is learning to make one on their own. I love this book for many reasons, but the fact that it’s giving me a new story in the oldest running narrative in human history (that would be the Marvel Universe, students), is some kind of amazing.  Like Miles Morales before her, Kamala represents the best kind of change in our comic book landscape, stories for THIS generation.  Peter Parker has grown up.  Batman has an entire family.  Captain America and Iron Man bicker like two rival politicians.  In Kamala Khan we’ve found our next big hero.  Only a matter of time before she becomes super. 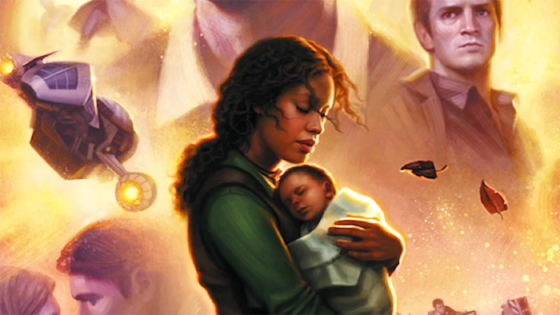 This wraps up the biggest and best tale of our favorite BIG DAMN HEROES, and I’m sore to see it go.  I’d love a monthly book, even if it were an anthology of tales in the ‘Verse, this book did well to breathe new life into the franchise.

Don’t Sleep on Dark Horse This Week!:  Also out from them is Mind MGMT #23 and The Goon:  One For the Road (one-shot)

SINCE WE’VE BEEN GONE! 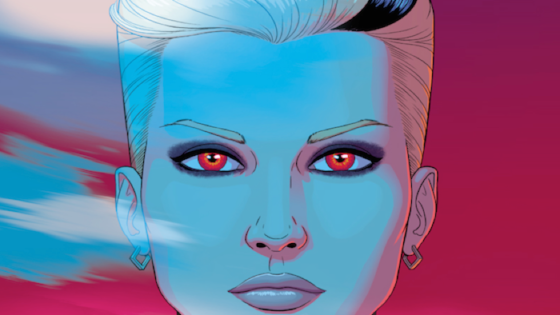 Sorry for the lack of column last week, folks! That one’s on me – I was busy vacationing in the world that Walt built – riding rides and buying overpriced souvenirs and trying to get fresh with the actress who plays Ariel (hubba-hubba)!  Won’t happen again until it happens again!  In our absence there dropped a coupla books worth mentioning this week – and hopefully your LCS ordered enough copies for you to still grab them.

The Wicked + The Divine #1 – the new Image series from frequent collaborators Kieron Gillen and Jamie McKelvie (busy bloke) that tackles pop music and divinity (two of my favorite subjects) and how they intersect in our media-crazed society.  A very strong first issue that promises a different take on “mythological deities coming back to shaft the masses,” I think.

That’s Because You’re A Robot – Also dropping from Image was this amazing little book.  Do you like the show Veep?  Would you enjoy it if one of the writers wrote a comic?  Would you like it if said writer (David Quantick) collaborated with famous psychedelic artist Shaky Kane on said comic?  Would you also like a healthy dose of bizarre and witty genre-parody?  Yeah, you’re gonna have to step right up because this just might be the book for you.  Two patrol cops, one of them is a robot, and nobody knows which.  It’s an Abbot & Costello routine dropped into a blender with a copy of Blade Runner, some LSD, and a bag of Skittles – the really sour neon ones.  It’s the kind of one-off pop culture absurdity that I eat up entirely, and I think you folks will dig it, too!

That’s gonna do it for me this week, folks, but your job is not yet over!

Jump down to the comments section and let us know what books you’re getting/have gotten, and what you thought of them. Later!